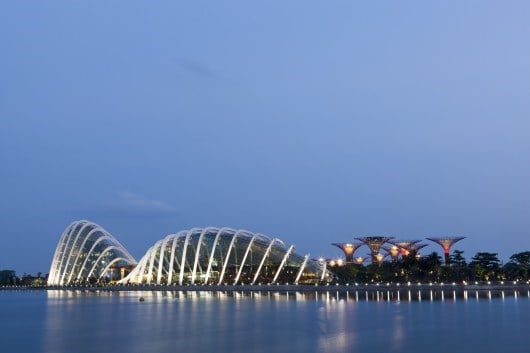 The RIBA Lubetkin Prize, awarded annually to the architects of the best new building outside the European Union, was won this year by Wilkinson Eyre and Grant Associates for Cooled Conservatories, Gardens by the Bay in Singapore. The prize, which was also awarded to Wilkinson Eyre in 2012 for the Guangzhou International Finance Centre, is now in its 13th year.

“…there have been a number of attempts to design greenhouses to show people unable to travel widely what the natural world has to offer. The UK led the way with Kew and latterly the Eden Project. What Wilkinson Eyre have done in Singapore is much harder and an even more impressive achievement, in that cooling plants in a sub-tropical climate is necessarily less energy efficient than keeping hot-house plants warm in a temperate climate. Yet here they have produced greenhouses covering two hectares that are carbon-positive. What’s more they have pushed the boundaries not only environmentally but also structurally, giving the city a new and public landmark.”

As RIBA described, “Cooled Conservatories, Gardens by the Bay are the biggest climate-controlled greenhouses in the world and a key project in the Singapore Government’s vision of transforming it into a ‘City in a Garden’. The project had the tough brief of creating cool growing environments in a pair of glasshouses, which are more commonly associated with creating warm conditions. The architects worked with structural designers, environmental engineers, landscape architects and horticulturalists to create an elegant and integrated solution to an unusual design brief.” 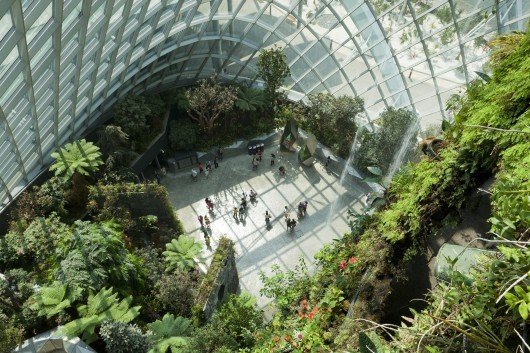 Alongside the Lubetkin Prize, the RIBA also awarded the 2013 Stirling Prize to Astley Castle and the 2013 Manser Medal to Slip House at a ceremony in London’s Kings Cross.