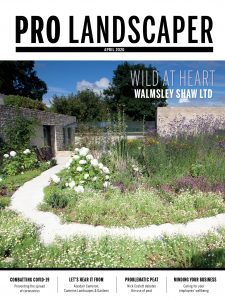 ‘Unprecedented’ was likely the most-used word throughout April, and rightfully so. Our April issue was to be the first one our readers would receive in lockdown, when we could only leave our homes for essential trips and seeing anyone who we didn’t live with was absolutely forbidden. (You remember lockdown, we don’t need to remind you).

One positive is that it gave everyone a little bit more time to read their favourite magazine. In this issue, we featured interviews with Alasdair Cameron of Cameron Landscapes and Gardens and GRDN, a small project BIG IMPACT Award winner in 2019.

Jo Manfredi-Hamer also continued her series on managing your mental health and wellbeing as a sole trader, which couldn’t have been more apt; this was followed by a wider feature later in the issue on what businesses can and are doing to look after their staff’s mental wellbeing too. It’s arguably more important than ever to check in on staff, especially those working from home and in Tier 4 locations.

After a worrying lack of clarity, Alok Sharma wrote a public letter to the construction industry saying that it could, in fact, continue to operate during lockdown – a relief to many, but there were still areas of the industry which were struggling. The interior landscaping sector, for instance, called for a rescue package from the government.

We also experienced more delays and cancellations, with COP26 as well as the opening of RHS Garden Bridgewater being postponed.