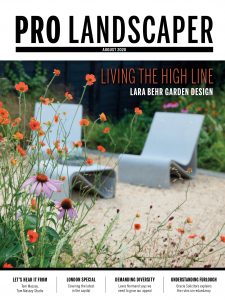 August usually marks flower show season coming to a close, so in this month’s issue we interviewed a garden designer who is quickly becoming a household name – Tom Massey. He spoke about his show garden experience so far, the disappointment of Chelsea being cancelled this year, but also his plans to return to next year’s show.

There was also a special focus on the capital in this issue. For our London supplement, we talked to Tony Woods of Garden Club London, which is known for taking care of its staff – and there couldn’t be a better time to focus on staff wellbeing. We also looked at how COVID-19 has rocked the capital and, as a result, commercial landscaping. It might have slowed somewhat, but developments such as Wood Wharf are still ongoing and set for success.

Speaking of sustainability, Mitie unveiled its Plan Zero City Landscaping Service which aims to reduce emissions in high-pollution areas through the use of electric vehicles and battery-powered kit, as well as cutting out single-use plastic and generating zero landfill waste.