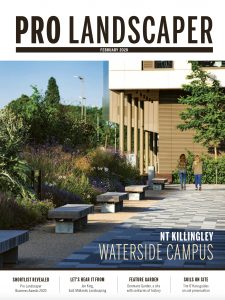 We looked to the year ahead in our February issue, with our Nurture contributors talking about biosecurity, COP26 and the need for landscape to be carefully considered when incorporated into housing developments.

New APL chairman David Sewell spoke to us about his plans to grow the association’s membership, and Jon King of East Midlands Landscaping explained how his company had grown in this month’s Let’s Hear It From and how it achieves a work/life balance.

In our last full month of being able to attend large gatherings, we held a ceremony in London where we announced the winners of this year’s Pro Landscaper Business Awards, including our deserving Supreme Winner, Oak View Landscapes. The winners of the 2020 SGD awards were also revealed at a ceremony in early February.

It was this month that PM Boris Johnson confirmed that HS2 would be going ahead too following an independent review, despite thousands asking for the large-scale infrastructure project to be reconsidered.