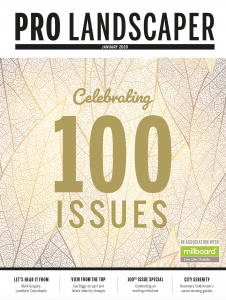 At the beginning of the year, Pro Landscaper celebrated its 100th issue. Wrapped in a golden cover, our January 2020 issue marked a milestone for the magazine and we couldn’t be more proud of how far Pro Landscaper has come since it first launched in September 2011. That doesn’t mean we weren’t thrilled with the inaugural issue, of course; in fact, we even copied it 99 issues later by re-interviewing Mark Gregory, who was our first Let’s Hear It From interviewee. We also spoke to the company behind the first cover, Keyscape, who sent in a portfolio to us nine years earlier. Now we’re starting to feel old…

One big and bold change for the January 2020 edition was not simply its gold and shiny look, though. We made a more permanent change by switching the plastic wrap in which the magazine would normally be delivered to compostable packaging. And we’ll continue to look at the ways in which Pro Landscaper can be a sustainable brand in 2021.

We weren’t the only ones stepping up our green credentials. The industry tapped its feet and huffed and puffed and we finally saw the introduction of the Environment Bill from the government. Defra also launched a new online resource for valuing our ‘natural capital.

January also saw the start of the usual Chelsea hype, with announcements left, right and centre about what we could expect to see at this year’s show. (Remember when events could still go ahead? Us neither…)