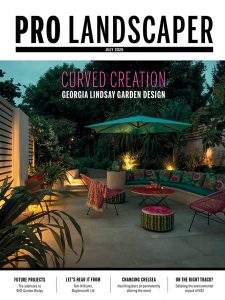 Not everything was cancelled in 2020. Pro Landscaper still launched the search for this year’s 30 Under 30: The Next Generation winners in our July issue, to highlight those in the industry under the age of 30 making a difference, in spite of COVID-19.

The development of RHS Garden Wisley continues too. We interviewed Mark Gregory of contractor Landform Consultants; and later, in a webinar for FutureScape VIRTUAL, we visited the site and more of the team behind the project.

Speaking of online events, Lewis Normand explored the potential, and the positive environmental impact, of travel free shows throughout lockdown and how these could – and perhaps should – continue post-pandemic.

The environmental benefits of a new high-speed trainline were also up for debate. HS2 could bring vast benefits to the industry, but could these be to the detriment of ancient woodlands and other biodiverse and flourishing spaces?

As the horticultural industry came under pressure to be proactively more inclusive, the RHS announced its new president, Keith Weed, would be putting diversity as a priority for the organisation, alongside sustainability. The RHS also revealed plans for its flower show at Tatton Park to be an online event this year.