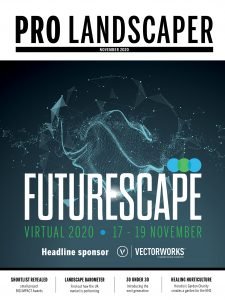 November is usually one of our busiest months. The magazine is typically jam-packed, and alongside this we produce a show guide for our leading landscaping trade event FutureScape and a brochure for our annual small project BIG IMPACT Awards. Well, we still did all of these things as we took our event and awards ceremony online (which is nowhere near as easy as it sounds).

We also revealed the winners of Pro Landscaper’s 30 Under 30: The Next Generation 2020, sponsored by Green-tech, which included our youngest winner ever at just 18 years’ old.

To add more to our plate, we launched our UK Landscape Barometer, your monthly insight into the landscaping industry. We aim to provide a report in each issue which, as time goes on, will allow us – and you – to compare areas such as turnover and staffing levels month-on-month as well as (eventually) year-on-year.

It’s not all about us, though. We also interviewed the new chair of BALI, Richard Kay, and of the SGD, Lynne Marcus, about their plans for the associations now they have been elected.

Sadly, coronavirus cases began to rise towards the end of October and a second, month-long lockdown was announced, taking place from 5 November to 2 December. We were eager to find out how this would impact the industry, which was fortunately allowed to continue operating.

There was some good news throughout November, though, as a number of virtual awards ceremonies were held. Our very own small project BIG IMPACT Awards, of course, took place over the three-day FutureScape VIRTUAL event. General manager Phil Tremayne also announced the 2021 APL Award finalists through FutureScape’s online platform; and the Landscape Institute revealed the winners of its annual awards in a ceremony presented by Julia Bradbury.