WWII veterans’ charity D-Day Revisited’s ‘D-Day 75 Garden’, which pays tribute to the last surviving D-Day veterans. Exhibited at the RHS Chelsea Flower Show 2019, it has moved to a permanent site at Arromanches, Normandy. It will be officially opened in a ceremony in the presence of 50 Normandy veterans on Thursday 6th June 2019 – the 75th anniversary of the D-Day landings.
With the help of the Royal Engineers, the ‘D-Day 75 Garden’ designer John Everiss has moved and rebuilt the Garden in seven days at a beautiful site above Arromanches overlooking Gold Beach and the famous Mulberry Harbour.
The ‘D-Day 75 Garden’ has been funded by generous contributions from HM government, supporting businesses and the British public. This Garden is a gift from the veterans to the communities they fought to liberate in 1944.
The Mayor of Arromanches-les-Bains, Patrick Jardin, says:
“We are pleased and proud to give the D-Day 75 Garden a permanent home in our town of Arromanches. Thousands of people come here every year from all over the world to learn about the story of D-Day. This Garden epitomises that story and will inspire younger generations on the 75th anniversary and in years to come.”
The ‘D-Day 75 Garden’ project has evolved into an inspiring, community driven story. It has captured the imagination of people across the country, who are keen to pay tribute to our surviving Normandy veterans. D-Day Revisited is thrilled to have received support from British and French businesses in the ambitious plan to transport the Garden from Chelsea to Arromanches. 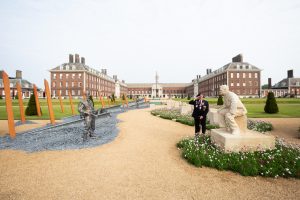 All compost used in the rebuild of the ‘D-Day 75 Garden’ has been supplied free of charge by Bord na Móna’s ‘Growise’ brand.
British supply chain company FreshLinc have provided three articulated lorries at no cost to transport the Garden from Chelsea down to Portsmouth, across the Channel to Caen and on to Arromanches.
For many years Brittany Ferries has helped veterans of the Normandy Campaign make the important journey back to France for the annual D-Day commemorations. This May they agreed to give free passage to vehicles transporting the Garden across the Channel.
You can still support this national project by visiting the crowdfunding page https://www.gofundme.com/dday-75-garden or TEXT “DDAY” to 70500 to donate £2
Show More
Share
Facebook Twitter LinkedIn Tumblr Pinterest Reddit WhatsApp Telegram Share via Email Print