Every child dreams of toys that come alive and this was the basis for the original show Starlight Express.

efig makes no apologies for borrowing the concept for their Annual Awards’ evening theme last week at the apt venue, the STEAM Museum in Swindon. Instead of Rusty the Steam Engine, efig’s biggest guest – literally – was the Caerphilly Castle, a steam locomotive of the Great Western Railway built in 1923.

This monster took centre stage in the dining hall for the proceedings but fortunately there were no roller skating competitors!

The 35 efig Leaf Awards were presented by Dr Craig Knight of Identity Realisation, a chartered occupational psychologist who focuses on research and advice about creating healthy working environments.

Members collected these Awards for either Design and Installation or Maintenance projects as well as Special Events and Christmas installations. This year three independent judges, Nicola Bristow and Rob Stirling of the RHS and Greg Redwood of the Royal Botanical Gardens at Kew were the independent panel of judges. All projects were visited by one of the judges for assessment apart from Christmas and short term event projects. These were judged by photographic evidence.

efig’s judges use a scheme similar to that employed by the RHS Chelsea Flower Show which means that all entries are considered on their own merit and an Award is given accordingly. This means some categories only one level was awarded. Gold, Silver and Bronze are available.

Last but not least 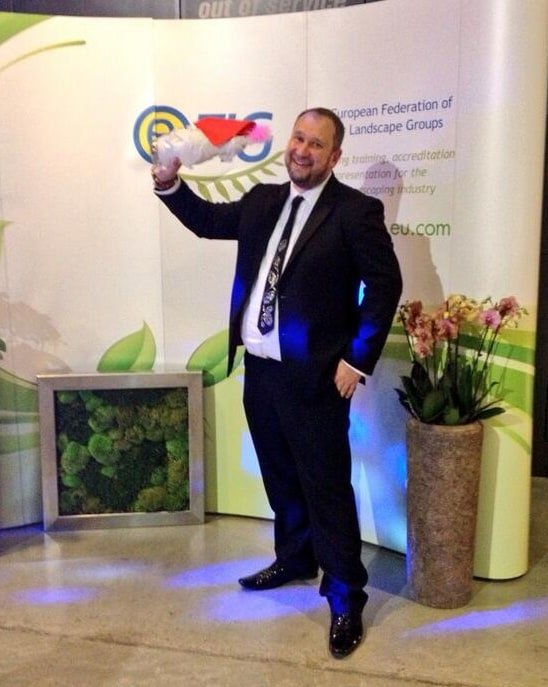 Ian commented, “I am so, so pleased to have been honoured by my industry and my peers – it’s been a wonderful 25 years.  I’ve had amazing opportunities and feel very lucky indeed to have worked with some incredible people and worked on brilliant projects.   I’m proud of my success and the success of Indoor Garden Design – here’s to another 25 years!”

Ian also celebrated this achievement at the end of last year with his Living with Nature exhibition at St Pancras Station and the St Pancras Renaissance Hotel.

Our sponsors for the evening were Koberg BV and The Nieuwkoop Group.