Actor Jeremy Irons opened his Watlington home to the public on Sunday for the second annual Watlington Horticultural Show. 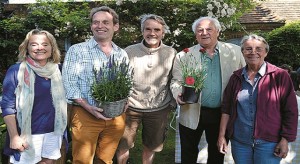 The film star, who lives in Hill Road with his wife, actress Sinéad Cusack, helped present awards to the winners of the show, which was founded last year by Watlington in Bloom.

The couple then hosted a dinner in their barn garden with live music and entertainment.

Hundreds of residents attended the show and many entered the baking and gardening competitions, which were judged by officials from the Royal Horticultural Society.

Competitions included a Victoria sponge contest and various children’s categories such as best animal made from vegetables and best magic potion.

Terry Jackson, chairwoman of Watlington in Bloom, said: “It was a lovely afternoon and we had lots of people coming along to have a look around.

“We had lots of lovely entries this year and, once again, the Victoria sponge category was dominated by men! I think this will become a date in the calendar for Watlington residents in future years.” Irons said: “Everyone seemed to have a good time. Gardening should be encouraged and it gave us an excuse to clean out the barn! We want double the numbers next year.”

Cusack, who recently starred in Other Desert Cities in the West End, added: “We don’t get involved in Watlington as much as we would like because Jeremy and I are often away working. It’s a fantastic little town and we love this house. It’s heaven.”

Tim Horton, former chairman of Watlington in Bloom, was joined by the couple as he presented the awards. The overall show winner with 46 points was Ian Naismith and the runner-up was Diane Seidl. Susan Fotherby won a special award for her home-made scones, which the judges said tasted “out of this world”. The children’s award went to Karl Orchard. Every child who entered was given chocolates.

Mr Horton said: “Everyone really enjoyed themselves. The weather was great and the setting sublime. We had lots of entries and the quality this year was very high. I organised the evening event and it was great to have a double header.”

Chairwoman Terry Jackson said: “The Thames and Chilterns RHS judges were most impressed with the standards and said the wonderful sponges were especially hard to judge with little difference between them in quality.”

An open gardens day will be held in Watlington on July 20.