Fast expanding UK topiary and specimen plant specialists Agrumi want you to know about the work they’ve been doing over the last year and some of their exciting projects coming up in the next few months.

Founded in 2006, Agrumi started life in the beautiful New Forest as a family-run wholesale ornamental tree, shrub and plant supplier. That remains important, but the company has diversified and now also offers bespoke topiary. Uniquely in the UK the nursery creates innovative designs from top quality plants nurtured on site. Each bespoke topiary project is approached individually and the company works closely with clients using its plant know-how to fully realize their aspirations and produce results that delight and surprise.

Agrumi topiary started 2015 by making a stunning display to welcome Percy Thrower’s Garden Centre in Shrewsbury into the Wyevale Group. The design features the nursery’s name in 1.2m letters, each handmade on a metal frame and covered in Star Jasmine. Planted into the ground, the letters are a great advertisement for the nursery and the power of plants. Other new commissions are arriving all the time, but Agrumi wants to keep pushing the imaginative limits of what it does and recently produced a set of human-size figures based on the original drawings for Lewis Carroll’s Alice in Wonderland, which celebrates its 150th anniversary this year. Carroll’s eccentric, whimsical characters with strong design features as realised by artist John Tenniel are well suited to topiary. Alice Liddell, Carroll’s inspiration, also lived and is buried near the Agrumi nursery which made the project particularly appealing. The RHS has adopted Alice as a children’s theme for 2015 and Agrumi will be displaying their topiary Alice characters in RHS venues and at other shows and events around the country later this year.

Agrumi is anticipating that 2015 will be an exceptional year for its topiary with the business building on a growing reputation and expanding into previously unexplored design territory inspired by new clients. 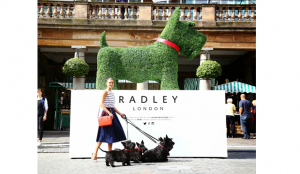