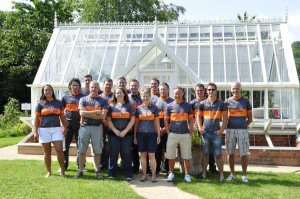 There has been a lot happening for Alitex over the last few weeks.  A group of intrepid souls signed up to the Tour de Force to fundraise for The William Wates Memorial Trust.  The Tour de Force follows the same route as the Tour de France but starting and completing seven days before.  Tom Hall, Managing Director of Alitex Ltd, had cycled solo with the Tour de Force previously and he thought it “might be fun” to enter a team from Alitex.  The Alitex Peloton went through some gruelling training sessions in the months leading up to the challenge which took place on 2nd and 3rd July from Ypres to Reims – aptly called Cobbles to Champagne – a whopping 350km (217 miles).  Their aim was to raise £15,000 for The William Wates Memorial Trust whose mission is to help the most disadvantaged young people keep away from a life of crime and violence and fulfil their potential.  The team is justifiably proud of their achievement and so far they have raised £15,610 and are still counting.  At the end of the challenge Tom Hall commented “it was a great thing for Alitex but more a terrific experience for all who came along.  The William Wates Trust is a great charity and I was delighted that our pedalling raised so much”. 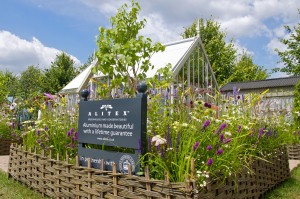 Whilst the cyclists were in France the rest of the Alitex team were getting ready for the RHS Hampton Court Flower Show. For the second year Alitex worked with garden design students from Sparsholt College and ran a competition to design a winning stand for RHS Hampton.  Alitex briefed the students in January and received 10 submissions in March – the standard was very high and a credit to the college and students. Kate Hart’s design was picked for its soft natural planting and attention to detail. Kate is studying garden design as a complement to her ‘day job’ as a dental hygienist in Petersfield!  Her efforts on site, which were supported by local gardeners from National Trust Uppark, earned Alitex the Best in Show Award for Trade Stands – the second year running they have won the award and worked with Sparsholt students.

Attributable quote (Harry Mycock):  “Having the Sparsholt Garden Design students compete to come up with proposals for such a prestigious client as Alitex is invaluable experience.  This is of immense benefit to all the students and not just Kate, who we are all delighted to see making her mark with Alitex at Hampton Court 2014.”

Nelly Hall runs all the events and shows at Alitex, and the RHS shows are the most important in terms of reputation and business. “It really has been a delight to work with Kate on the stand this year. Her stand design has been so well received and much appreciated by all our visitors. The standard of the students from Sparsholt has been excellent, and to win 2 best in show awards for 2 consecutive years is testament to that. We’re looking forward to future collaboration – although the stakes have been raised!!”