As Britain’s best garden designers and horticulturists celebrate their successes at this year’s RHS Chelsea Flower Show, a survey from Homebase, one of the UK’s biggest garden retailers, reveals that the nation’s gardening know-how is in danger of being lost to future generations.

The survey, which questioned people about their gardening knowledge to discover who is teaching the younger generation basic gardening skills, suggests that grandparents could be the secret-weapon in helping Britain maintain its reputation as a nation of gardeners.

The results show that nearly one third of 16-24 year olds learnt about gardening from their grandparents, compared to just under three per cent who say they learnt it from a teacher.

It follows research by the Royal Horticultural Society (RHS) that showed that only one per cent of today’s parents were taught how to garden compared to 55 per cent of grandparents.

Gardening has long been at the heart of the British way of life but this lack of green-fingered knowledge amongst today’s parents’ means it may be in jeopardy, highlighting the crucial role of grandparents in educating future generations.

The survey also revealed that 42 per cent of grandparents say they are passing their gardening expertise on to their grandchildren with one in five (20 per cent) saying they wanted to teach their grandchildren about gardening because they’re not learning it in school or from other family members.

Graham Heald, Retail and Distribution Director at Homebase, which carried out the research, said: “For many people their first experience of gardening comes from spending time in the garden with their grandparents. Over half (55 per cent) of respondents said they had fond memories of this, from planting flowers and seeds, to growing vegetables and mowing the lawn.

“We know first-hand from our students in the Homebase Garden Academy – an initiative we set up to help unearth Britain’s next generation of gardening talent – just how important grandparents can be in passing on valuable gardening knowledge. Many of our students say it was their grandparents who gave them their love of gardening and inspired them to pursue it as a career.”

Today, (22nd May) Homebase is launching its third annual Garden Academy and is urging anyone over 16 with a passion for gardening and who wants to learn more, to apply for one of the 20 places

Graham continued: “Wherever your love of gardening comes from whether it’s from grandparents, parents or even the Chelsea Flower Show, we want to help develop that passion into a career. Who knows, we might even uncover the next generation of Chelsea medal winners”

Mike Gogerty, a student in this year’s Academy, said: “I love gardening and memories of helping my Grandma plant flowers and vegetables stayed with me as I grew up. She encouraged me to learn and helped me develop a passion for garden design by encouraging me to give it a go, even from an early age. I still look to her for gardening advice now. I’d urge anyone who’s thinking about gardening as a career to give the Garden Academy a go.  It’s an amazing opportunity to learn from the very best and is a fantastic stepping stone to a really rewarding career.”

One of the highlights for this year’s 18 students has been working with award-winning garden designer, Adam Frost, to build and plant The Homebase Urban Retreat Garden in association with Macmillan Cancer Support at this year’s RHS Chelsea Flower Show.

The garden has been designed as a community garden where people from all generations can come together and share their passion and knowledge for gardening, and enjoy community life.

Adam Frost said: “Some of my earliest memories of gardening came from my grandparents including time spent on my Grandfather’s allotment. They gave me the freedom to explore and I suppose it’s that that really inspired me to turn it in to a full-time job.

“Britain is a nation of gardeners and the Garden Academy is all about encouraging the next generation to carry on that mantel. For a lot of the students, and many other gardeners out there, it’s their grandparents that gave them their first taste of it. If my grandparents could see me now having won my seventh Gold medal at the Chelsea Flower Show they’d be bowled over. It just goes to show what the smallest seed can grow in to.”

For more information or to apply visit homebase.co.uk/garden-academy. 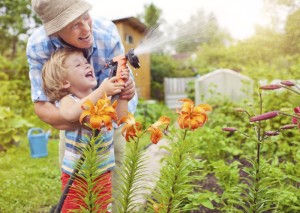