Sunday was National Cancer Survivors Day. It celebrated those who had overcome cancer and are now a 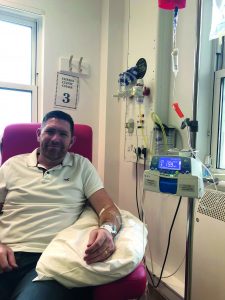 source of inspiration to others. It took Shane McCormick a while to realise that he is one of those to be recognised on this day, and every year going forward. The regional sales director (south) for Talasey Group has fought cancer – twice – and in March this year, his immunotherapy for melanoma fortunately came to an end.

For 12 months prior, Shane had been receiving treatment. Once a month, he’d have a blood test before receiving Nivolumab, a drug used to help the immune system kill off cancerous cells. The side effects, Shane says, can be severe, scoping everything from rashes to organ failure. “When I was having treatment, I felt ill within two or three days,” says Shane. “The anxiety of knowing I was going to be ill the next month and the month after that really wore me out, I was so fatigued.”

After a year, though, Shane was declared cancer-free and his treatment came to an end; he will now have to attend a check-up every six months. However, the celebrations were somewhat short lived. His immunotherapy put him in the group of those at risk from coronavirus and he was told by the NHS to self-isolate for 12 weeks. “I didn’t go any further than the front of my driveway, not even to the shops,” says Shane. “We’ve been able to go out the last couple of weeks, after we spoke to the hospital, and we’ve been making the most of it.”

Shane’s not the only one making the most of the rising temperatures and lessening of lockdown restrictions. As temperatures soared to 28C towards the end of May, thousands flocked to beaches across the UK, as well as nearby parks and green spaces, soaking up the summer sun. And with the construction industry being encouraged by the government to restart, landscapers, gardeners and maintenance operatives throughout the country are able to get back to work and back outside.

But how many are ensuring they’re protected from sun damage? Or are even aware of the dangers of spending hours under the sun without sun lotion? According to the Melanoma Fund, somebody is diagnosed with melanoma every eight minutes. This type of skin cancer is usually caused by damage from UV light from the sun, and you don’t need to be sunburned to be a victim.

For Shane, taking care when outside has become a way of life. He admits a cupboard in his house is usually stocked with around 15 bottles of Factor 50 sun cream. “It’s pretty much hat on and Factor 50 from April to October,” he says. “For those who suffer from skin cancer, that yellow thing in the sky is evil, and it’s life changing.”

READ NEXT: 6 TIPS FOR STAYING SAFE WHEN WORKING IN THE SUN

Shane is now using his experience to warn others who work outdoors to take measures to protect themselves, and is now a trustee of Band of Builders, a charity which helps tradespeople who are going through a tough period. “You can’t turn back time, so be prepared. You should have sun cream in your van, there shouldn’t be any excuse to not do this. Men can be a bit worried about asking someone to help them put sun cream on their backs, but my melanoma was on my back, on a part I couldn’t have reached myself with sun lotion. And I got caught. I’m one of the unlucky ones, I suppose, and I can’t change what’s happened, but I can tell my story and make people aware of the dangers.” 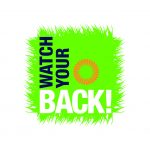 The Melanoma Fund’s annual ‘Watch Your Back’ campaign tackles the stigma Shane talks about. Supported by the likes of ambassadors Adam Frost and Mark Lane, the campaign encourages gardeners to protect their skin to avoid overexposure to UV rays, including areas they themselves cannot reach. More men die from melanoma, despite it being more prevalent amongst women, as men are less likely to check themselves for signs of the disease. The most common part of the body for men to develop the disease is on the back, and if detected and treated early, it is almost entirely curable.

This year, the Melanoma Fund is focusing its campaign on aesthetics. CEO Michelle Baker says: “With climate change set to make our summer’s even hotter, raising awareness of sun protection has never been more important. We are focusing on sun damage this year, as ‘aesthetics’ can be more of a trigger to some than ‘health’. A tan may look fine for a short while, but it has its price, and your skin eventually pays.”

Don’t let anything get in the way of you protecting yourself, and others, from UV rays. Ensure you and your employees are using sun cream and topping up the coverage throughout the day, and wear a hat when possible. For more information on how to make your workplace ‘sun safe’ visit the Skcin website.