A RARE tree native to Australia, and once renowned by the Victorians for its alleged medicinal properties, has come into flower several weeks early in Wimborne.

The Southern Sassafras tree has blossomed in Knoll Gardens, showing off its velvety cream flowers to herald the start of spring.

Also known as the Australian Snowdrop Tree, the Southern Sassafras is just one of many rare and unusual trees and shrubs to be found at Knoll Gardens.

Not often seen in the UK, the tree is a native to the warmer climates of Australasia and was praised by the Victorians as an all round tonic – possibly due to the aromatic nutmeg-like smell of its crushed leaves.

However, the specimen nearly did not make it into the garden at Knoll. The garden’s owner, Neil Lucas, said: “When I took over in 1994, there were plants looking sad at one side of the nursery which I very nearly threw out.

“I realised just in time that some had belonged to the originator of the garden.

“He had a specific interest in Australasian plants so I knew it was something he thought worth growing.” 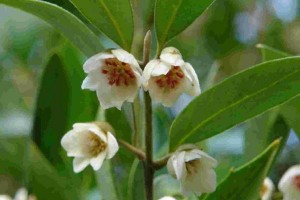