Stilettos, craft beer and WB Yeats are among the inspirations for some of the 25 show gardens to be unveiled at Bloom gardening and food festival in Phoenix Park tomorrow.

This will be the ninth year of the festival, which is run by Bord Bia, and workers have been preparing the 70-acre site for more than a month.

Bord Bia spokesman Gary Graham said visitors were in for a real treat this year as the show gardens were breathtaking.

“The designers have continued the tradition of repeatedly raising the bar on previous years, to develop beautiful, imaginative and thought provoking designs,” he said.

They include Footfall, a concept garden which will see the dramatic use of more than 144 pairs of stiletto heels.

A garden created on behalf of the Goal aid agency by Joan Mallon shows how techniques such as micro-gardening, bag gardening, recycling and rain-water harvesting help families make the most of difficult living environments.

Yeats’s Secret Garden in Sligo is based on his poem The Lake Isle of Innisfree while the trend towards craft beer has inspired a garden created by designer Breffni McGeough and master brewer Alex Lawless.

The teenage perspective on issues such as garden design, food security and nutrition will be highlighted at the Bloom in Transition showcase which features installations and projects by Transition Year students. And Agri Aware, the agri-food educational body, will bring almost 800 primary school students to the festival to see the Bloom farmyard, organic gardens and poly tunnels.

Irish Times journalist Jim Carroll is taking the Banter concept to Bloom for the first time and the Banter marquee will host a series of discussions on issues around food, agriculture and sustainability.

A series of cookery demonstrations by celebrity chefs will run throughout the weekend and artisan food producers will be selling their wares.

In keeping with tradition, the festival will be opened at noon on Thursday by self-confessed gardening fan, President Michael D Higgins. Last year he described it as “the ploughing championships for urban dwellers”.

The five-day festival attracted more than 106,000 people last year and preparations are already beginning for next year’s 10th anniversary. 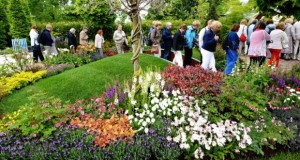