Alison Pringle, the head gardener at one of York’s showcase city centre gardens is enjoying the fruits of her labour with fresh plans for the future. 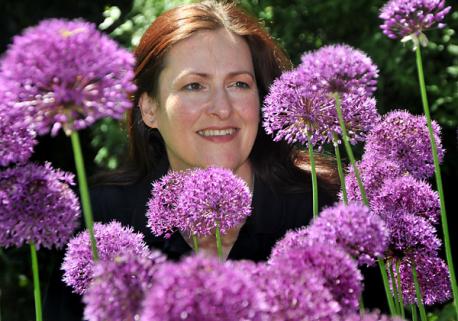 An edible woodland is one of the ideas being considered for York Museum Gardens where Alison Pringle is currently creating a detailed log of plants on show while also drawing up plans to develop land to the rear of the art gallery.

Alison, 47, who moved to York with her husband Steve is originally from Tyneside and worked for 21 years, on and off, at the Cragside National Trust Property in Northumberland, where she began as a trainee, and eventually became head gardener.

She said: “I love York. My husband and I visited the city two or three times a year for as long as I can remember, so it’s funny how things work out.

“I arrived at Museum Gardens in May last year, just before the Mystery Plays. I saw the opportunity advertised and thought ‘what a wonderful place to work’, then jumped at the chance.”

She said the plant life in Museum Gardens was very different to Cragside, and she would continue the work of her predecessor Sjaak Kastelijn, who left to run his own business.

Alison said: “There were seven million trees and shrubs planted over the hillsides, completely transforming the landscape, and also the weather in the nearby village, because the trees grew up the winters became warmer and wetter.

“The winters couldn’t be better than they are here in York though.

“It’s an ongoing process. Any sort of garden by its very nature is changing over the year, so at the moment I’m busy trying to reinforce the work, and keep the place looking really nice.”

Looking to the future she said: “We’ve had a couple of ideas. One is to create an edible woodland which would constitute an area of trees and shrubs where some component is edible.

“It certainly wouldn’t be a vegetable patch or allotment, more like an ornamental garden which looks beautiful but is also edible.

“The other would be a garden of Yorkshire flowers.”