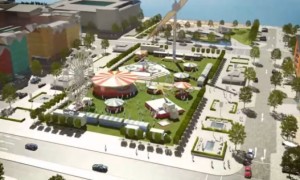 The brightest and best landscapers and gardeners in the area are being invited to showcase their talents in the heart of Dundee’s waterfront.

As part of the waterfront redevelopment, Dundee City Council is creating a major new civic space stretching from the back of Caird Hall towards the River Tay.Recently named Slessor Gardens, most of it will be laid out in grass and be used as a public park but it has now emerged that a number of smaller garden spaces are being created to either side.

Will Dawson, convener of Dundee City Council’s city development committee, said seven of the 10m x 10m gardens would be made available to local designers and businesses to plan in their own style.

“The idea is to reflect the philosophy and impact of the V&A and celebrate the city’s status as a Unesco City of Design,” he said.

Each garden space will be available for five years, with an option to extend at the end of the period, during which time all maintenance and upkeep will be at the expense of the successful applicants.

They will have to pay a fee of just £1 a year to secure the green spaces.

Mr Dawson added: “We are encouraging applicants to use the gardens to showcase local plants that maybe reflect the design innovations Dundee has contributed to the world and in particular how local plants have influenced local industry, culture and employment. They might want to incorporate a local heritage dimension, perhaps with reference to local landmarks, but should certainly consider biodiversity, sustainability and ability to attract wildlife and insects. Submitted designs will be expected to encourage and inspire pride in Dundee and become a landmark in themselves.”

Applications containing drawings and planting proposals should be submitted by September 4 after which they will be assessed by the council.

The successful designers will then be notified by September 18.

Among those invited to submit applications are thriving local nurseries, landscaping businesses and voluntary organisations and Dundee and Angus College. Horticulture students and staff at the college have plenty of experience of creating small gardens for events such as Gardening Scotland and the Dundee Flower and Food Festival.