Some of Lisa Burchill’s fondest memories are racing around after her grandfather and watching him with fascination as he tended his garden and vegetable patch.

Hardly surprising then that she has ended up in garden design – or so you would think – but it actually took Lisa some time to realise where her considerable talents lay.

Now Lisa is set to take on one of her biggest challenges to date – a show garden called Out of Darkness at the RHS Malvern Spring Festival which takes place next month.

She is undertaking the project with two of her fellow graduates from the garden design diploma course at Bristol Botanical Gardens in which she gained a diploma before setting up Lisa Burchill Garden Design.

As a proud Bristolian who grew up in Pucklechurch and Kingswood Lisa wanted the garden to reflect the city.

“We didn’t want the garden to be too showy but something people could connect with and would resonate with them,” she said when I met at her home in Fishponds.

“At the same time we wanted it to be modern and contemporary.”

With that in mind Lisa, 40, took to the internet for some inspiration.

“I came across the idea of moss graffiti and given that we had all studied in Bristol – which loves its art and the whole Banksy thing – I thought it would be a great idea.

“I love Banksy and was of those people who queued up for more than three hours when there was his exhibition in Bristol.

“You basically make a paste out of moss with things like beer and yoghurt and paint it onto a wall.

“You then have to keep it moist and slowly the moss will grow but you do have to be prepared to be patient!

“Unfortunately with the time limitations we have and the fact everything has to look perfect for an RHS show we will have to use pre-grown moss and stick it on.”

The next challenge was a design to attach the moss to and Lisa came across Tommy Brown and Lee Morris of the We Love Art company which is based in Malvern.

“They had been in trouble for doing Banksy like stencils of Edward Elgar all over Malvern and I loved it and they are on board” the former Mangotsfield School pupil, said.

“They have done the stencil of a tree canopy which will be on a wall at the back covered in moss with decking leading up to it. As people walk towards it they will get to a specific spot where they will realise that the decking is the tree’s trunk and the moss is it’s canopy.

“It’s our first show and it’s going to be tough but the dream, always has to be to come away with a gold medal.”

Incredibly though Lisa’s passion may never have been realised if it weren’t for her dear mum.

“Several years ago I went to the Chelsea Flower Show with my mum,” she said.

“I was not really that interested in going but I’m glad I did!”

RHS Malvern takes place between May 7 and 10 at the Three Counties Showground in Worcestershire.

Visit https://www.rhs.org.uk/ for information and tickets.

For more about Lisa visit www.lisaburchill.co.uk 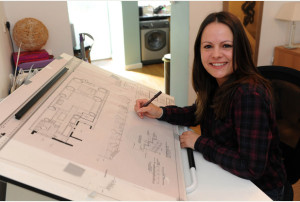