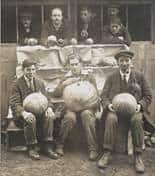 Ahead of a new autumn exhibition, RHS seeks relatives of the forgotten Brits who set up a horticultural society in a First World War German internment camp

The RHS Lindley Library has uncovered a remarkable piece of First World War history in its archives: the ‘forgotten’ story of an intrepid group of British men who set up a horticultural society in the Ruhleben civilian detention camp in Germany and helped to feed their fellow prisoners throughout the war.

This unique story will be told in a new exhibition in October 2014 to commemorate the centenary of the First World War. The RHS asks anyone who thinks a relative may have been one of the internees to get in touch at [email protected] and share their story about these men who overcame long imprisonment and harsh conditions with crops and flowers. Photographs of the internees can be viewed at: www.rhs.org.uk/ruhlebenhorticulturalsociety

More than 5,000 British citizens were interned at Ruhleben, an old racecourse outside Berlin, which was described when it opened as “scandalously inadequate” and “not fit to keep pigs in”. Working together they transformed the camp, overcoming terrible conditions and a hopeless situation to create a self-governing society within its fences. The Ruhleben Horticultural Society was formed early on and within days of its first meeting, the secretary wrote to the RHS asking to become an affiliated society. The RHS responded at once, and sent huge amounts of seeds, bulbs and advice to its new affiliate, deep behind enemy lines. The members of the new society, eventually numbering more than 900, fed the camp’s inmates, earned money to fuel its fledgling economy, disguised their bleak surroundings and organised RHS standard flower shows to boost morale. The two societies corresponded throughout the war, with internees sending back the photographs, letters and reports which will make up most of the exhibition.

Fiona Davison, Head of Libraries and Exhibitions at the RHS, said: “The story of the Ruhleben Horticultural Society is completely unique, in that unlike many First World War histories that tell of the triumph of the human spirit over adversity, it is all but unknown.

“We have a fantastic collection to work with but there is still much that can be added to the Ruhleben story and we hope very much to hear from members of the public who can help us with this. One of the aims of the projects being undertaken around the centenary of the First World War is to help us as a society better understand, connect with and remember the lives and experiences of those affected by the war. The history of the Ruhleben internees is an as yet unexplored part of this experience and it is a privilege for us to help in the telling of it.”