‘Poppy Goes Wild’, a new children’s book about a young girl rewilding her grandad’s farm, is being backed by celebrities including Joanna Lumley and Hugh Fearnley-Whittingstall.

In recent decades much of Britain’s wildlife has disappeared, with over half of species in decline and with 15% threatened with extinction, because of issues including habitat loss, agricultural changes, pollution and climate warming.

But throughout the country, initiatives are being undertaken to restore the balance and to safeguard British wildlife for future generations. 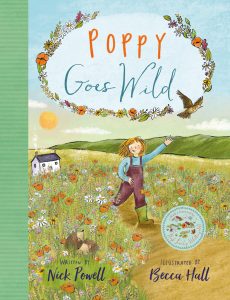 In Poppy Goes Wild – written by Sussex-based award-winning TV producer Nick Powell – the title character is on a mission to save her grandad’s farm by returning the countryside to how it was 50 years ago, when wildflower meadows and native wild animals flourished. Hares hopped, skylarks soared, otters raced and peregrine falcons dive-bombed throughout the idyllic landscape.

Poppy Goes Wild, illustrated by Cornwall-based Becca Hall, demonstrates that you are never too young to start looking after nature. The book encourages children and families everywhere to do what they can to help nature work its magic.

In the foreword, writer, broadcaster and River Cottage star Hugh Fearnley-Whittingstall says: “Many populations of insects, birds and small mammals, and the marine life around our coasts, have plunged to worrying levels. But now there is a glimmer of hope. Trees are being planted, patches of land are being allowed to overgrow, and wild flowers are encouraged to spring up once more.

“People are beginning to understand that simply leaving spaces where nature can be allowed to perform its restorative magic can hugely enhance our gardens and our landscapes, and will entice many of these embattled creatures to return and flourish. I urge you to be part of this rewilding movement, in any way you can. Be like Poppy, in this charming and inspiring story.”

Author Nick Powell – who in his previous career created a number of highly successful TV brands, including the global hit Supernanny – has written the book in the hope that it will inspire determination in children to do what they can to look after wildlife.

“The key message for me in Poppy Goes Wild is that if you embrace the wonder of wildlife at a young age you will never look back – and the rewards will be there for you and for nature, for the rest of your life,” said Nick.

The book’s nature-friendly message is being backed by the charity Rewilding Britain.

Poppy Goes Wild is published by Little Steps Publishing and is available to buy online at Waterstones and Amazon and at your local bookshop.