A case of the tree disease Chalara dieback of ash has been confirmed in a woodland in Devon. 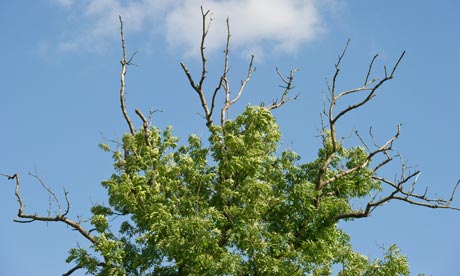 Devon is the 17th county in Great Britain where Chalara has been discovered in the wider environment (established forests, woodland, hedgerows and similar); the other counties are Norfolk, Suffolk, Essex, Cambridgeshire, Kent, Surrey, West Sussex, East Sussex, Lincolnshire and Northumberland in England; Carmarthenshire in Wales; and Moray, Fife, Perth & Kinross, East Lothian and the Scottish Borders in Scotland.

The disease has now been confirmed in 525 sites across Great Britain, including 185 locations in the wider environment. Chalara was discovered in England’s woodland last Autumn as a result of an intensive survey of sites where ash trees are present. As the trees are now in summer leaf, it is easier to see cases of Chalara, and further sites are likely to be identified.

Martin Ward, the UK Government’s Chief Plant Health Officer, said: We expected to see new cases as the leaves came through on ash trees. The better informed we are, the more effective we can be in our work to slow the spread and reduce the impact of this disease, and we will be investigating this new case closely.”

As part of the Government’s plan to manage Chalara, published in March, work is under way to identify genetic resistance in ash trees. A quarter of a million saplings have been planted in East Anglia to expose them to Chalara, and they will be monitored to see which ones show signs of resisting the disease. This work complements research being undertaken in the laboratory to isolate a Chalara-resistant genome.

Later this month Defra is hosting a summit to discuss a collective response to the recommendations made in the report from the independent Tree Health and Plant Biosecurity Expert Task Force published in May.

Common ash is a native British species of tree, and ash trees provide about five per cent of all woodland cover. Chalara dieback is a serious disease which has affected a high proportion of ash trees in northern Europe and which was confirmed in nursery stock in the UK in early 2012.

Further information and a map showing all locations with confirmed cases of Chalara is available at www.forestry.gov.uk/chalara.