The Telegraph’s 1997 Chelsea Flower Show garden launched a new era of Modernist gardens – and now the designer responsible is back.

Modernist garden designer Christopher Bradley-Hole is creating a Chelsea Flower Show garden this year for The Daily Telegraph, and inevitably thoughts of seasoned Chelsea-goers return to the ground-breaking garden he designed for the show in 1997, which won Best in Show for The Telegraph. Christopher’s Latin Garden, a minimalist composition inspired by the life of Roman poet Virgil, has gone down in the annals as probably the best Chelsea show garden in recent memory – perhaps the best garden ever seen at Chelsea. It proved something of a turning point for the show and even for garden design in general, marking the moment when Modernist gardens became a viable option for those who commission their gardens on the back of what they see at Chelsea.

The Latin Garden was a meditation on the three stages of the life of Virgil, from his childhood in the countryside, to his career and fame in the city, to his retirement to a rural retreat. In retrospect, perhaps the key to the garden’s success was the way the design seemed to exist on another plane. It was not an attempt to create an ordinary domestic space that could be envisaged elsewhere in “the real world”. The design was based on the idea of a straight walk from one end of the garden to the other, subtly divided by low walls and, halfway along, a central pavilion with acid-etched glass walls. One of the garden’s strengths was that it “read” just as clearly from the side as it did from the front, with the Chelsea visitor somehow feeling immersed in the garden despite the fact that visitors cannot enter the exhibits. The light stone and fine decking was complemented by a disarmingly simple planting, with the purples of tall bearded irises and giant alliums gilded with a smattering of grasses (mainly luzula and Sesleria autumnalis) and columnar conifers, the tall trees creating a strong feel of the Roman Campagna of classical times. Christopher worked with the sculptor Belinda Eade to bring Latin phrases from Virgil into the garden, inscribed on four pieces of stone. It was a remarkably atmospheric space, and a garden which people remember extremely clearly (Chelsea show gardens are notoriously transitory).

Christopher was always aware the Latin Garden was different. “It did feel risky, and I felt completely alone,” he says. “I just didn’t know how people were going to react. I wanted to do a modern garden that could be taken seriously. I’d been to Chelsea the year before and there were these gardens trying to be modern, with funny little plastic things in them. [In my garden], the proportions and the detail were really important.”

“Charles Moore [then the editor of the Telegraph] was a big influence,” he continues. “He was always there and had a gentle guiding hand on it, almost subliminal. I knew he was interested in the Classics and understood them and that was always there in my mind, right from the start.”

The word “understood” is important to Christopher, for he is a designer for whom rigorous exactitude and attention to detail are all-important, whether in his interpretation of Modernist architecture for use in gardens, or his mining of Virgil’s life and work. But one can hardly overstate the difference there was at that time between Christopher’s garden and the Chelsea norm, which was still very much preoccupied by the English Arts and Crafts planting tradition. As Therese Lang, creator of the Westonbirt and Cottesbrooke garden shows, says, “Gardens at Chelsea could be classic and beautiful and perfectly executed – but they were conventional. Christopher broke all the rules.”

In this context, a Modernist design proved to be almost unrecognisable even as a garden. “I remember the day a lot of TV companies came in,” Christopher says. “A big influence on me was [architect] Tadao Ando and Japan, and the Japanese company just walked straight past our garden while it was being constructed. Everyone else was making gardens with tumbledown walls and roses – and this TV crew literally thought my garden was the toilet block,” he says with a laugh.

For Charles Moore, who commissioned Christopher, it was an opportunity to create a garden that was “striking, bold and theatrical – I felt it would have been a pity if the Telegraph had played safe with the opportunity. I liked the thought of having something classical and modern at the same time.

“I remember Terence Conran coming along to the garden,” he adds. “Tony Blair had won the election a few weeks before [May 1 1997] and Terence Conran said, ‘New Labour, New Garden’. Of course I wasn’t remotely interested in it being New Labour, but I did want it to be different.”

Professionals were immediately aware that Christopher had done something rather special. “It did mark a threshold in one respect, which was that Christopher was a practising architect,” recalls Michael Balston, landscape designer and seasoned RHS show-garden judge. “The manipulation of space was very subtle and that hadn’t really been done before. It had this cleanness about it. It was focused, yet there was a whole world there.

“It wasn’t a question of the facile ‘garden room’ idea. It was what we used to call filtering – the creation of spaces beyond, which could be seen as through a veil. And it was all integrated: the space, the materials and the plants all locked together.”

Tom Stuart-Smith, who vies with Christopher as the most successful Chelsea designer of recent times, says Christopher is one of the two contemporary designers who have influenced him most (the other being Dan Pearson). “That was a pointedly intellectual garden and it was so amazingly refreshing and modern in the context of Chelsea at that time,” he says.

“Christopher made it smart to want a new-looking garden. And there was so much going on in it – he has this curious reputation as a minimalist, but there were so many little incidents and details.”

For Mary Keen, it was the way the planting was integrated with the overall design that was most interesting. “He was always thinking of the whole picture rather than the detail; the plants were put in at the end. He was innovative with the planting – it was very spacey.”

Indeed, in the context of garden design at that time, when borders could be so pumped up with plants they looked like they were on steroids, Christopher’s “border” in the Latin Garden looked positively sparse. “I remember Simon Hornby [then RHS president] coming along,” he recalls, “and he said, ‘We love the spaces between the plants’. That wasn’t something I really thought about. It seemed quite natural to me.”

There was also an element of innovation about the plant choice – the use of a pared-down palette of striking plants, little colour variation and a backdrop of grasses. In 1996, as part of his preparations for Chelsea, Christopher made his first visit to Piet Oudolf’s now-celebrated nursery in the Netherlands. They hit it off and talked plants, and Christopher returned with various specimens including the unknown Thalictrum rochebrunianum he would later use in the garden, causing a minor sensation, a plant which is now firmly in the garden design repertoire.

Looking at images of the Latin Garden now, it’s hard to believe that it seemed so radical just 16 years ago. But that’s a reflection of how influential it proved to be. After 1997, modern gardens became a fixture on the Chelsea scene. So far none has surpassed the original and best, but perhaps 2013, Chelsea’s centenary, will be an auspicious year. 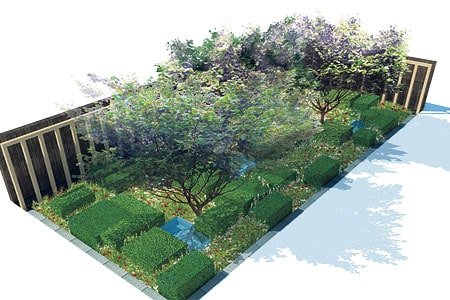 The Telegraph garden for Chelsea 2013, designed by Christopher Bradley-Hole, is a contemporary and contemplative design, inspired by the English landscape, by the Japanese approach to garden making and by modern abstract art.

Christopher says: “The garden is a representation of England as a wooded landscape from which openings were cleared to allow settlement, civilisation and cultivation. English native trees and shrubs are used in a graphic way to create an understorey which expresses the way a field pattern has been superimposed on the land.”

The garden reflects Bradley-Hole’s personal passion for the English landscape and also his visit last year to Japan, which has long been an inspiration for his design ideas.

As well as blocks of box, yew and beech, which form the field landscape, oak is shown as a structure – a colonnade of columns crafted from English green oak.