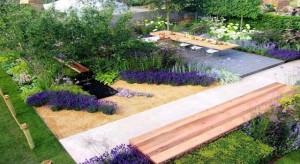 Paul who is from Mount Avenue impressed the judges with his smart, modern garden called ‘Vestra Wealth’s Vista’ which was designed for a contemporary home and elegantly caters for outdoor dining.

Various levels and layers of planting and hard landscaping surround a dining terrace with a cantilevered 13 foot cedar table.

Gabions are surrounded by copper and packed with split timber, which helps to encourage wildlife.

Clipped box lawns are used as alternatives to grass, with one of the lawns supporting a cedar water channel that cascades into a copper pool beneath.

The planting has large drifts of verbena, nepeta and lavender, with a colour palette of purples and blues to create a cool atmosphere on a hot summer’s evening.

Paul, who has been designing gardens for 27 years, also added a nice touch by edging the whole garden in a copper trim to give a slug/snail proof plot.

He has also designed gardens for the Louise Kennedy Garden and the Chelsea Flower Show in London where he was a sliver medalist in 2003.

Paul graduated from the National Botanic Gardens in 1986 and has since gone on to design gardens in Ireland, America and Europe, while specialising in town and city gardens where attention to detail is of the utmost importance.

Some of his other projects include many hotels, commercial projects and state commissions.

For further information on Paul and his designs you can visit his web site at www.paulmartindesigns.com.