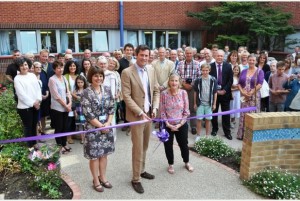 The garden, which cost £44,000 and was paid for by donations to the Stars Appeal’s ward funds, has been designed for patients who have had a stroke or need cancer treatment.

The landscaped courtyard garden sits between the Farley Stroke Unit and Oncology Outpatient Clinic and has been built so that patients have a quiet area to relax.

It has a low wooden bridge which crosses over a bog garden and is surrounded by shrubs and flowers which have created a natural wildlife habitat.

Tamara Everington, Consultant Haematologist said: “We would like to thank the Earl of Pembroke for his continued support of the Stars Appeal and for opening our new garden.

“We would also like to thank our patients, staff and carers who made this such an enjoyable occasion on what was a beautiful, warm early autumn day.

“We are enormously grateful to local people who support the Stars Appeal’s Pembroke Unit and Stroke Care funds, whose donations have funded the creation of the garden. We are also grateful to Sister Carolyn Sawyer who led the redevelopment project and to Tina Crossley and the team of volunteers from Horatio’s Garden who helped with the design and planting.

“We see over 5,000 people a year in our oncology clinic and over 400 people a year are admitted to Farley Stroke Unit. This wonderful new garden will help provide a tranquil and relaxing area for both stroke patients and those who need to come in to be treated for cancer and other haematological disorders.”