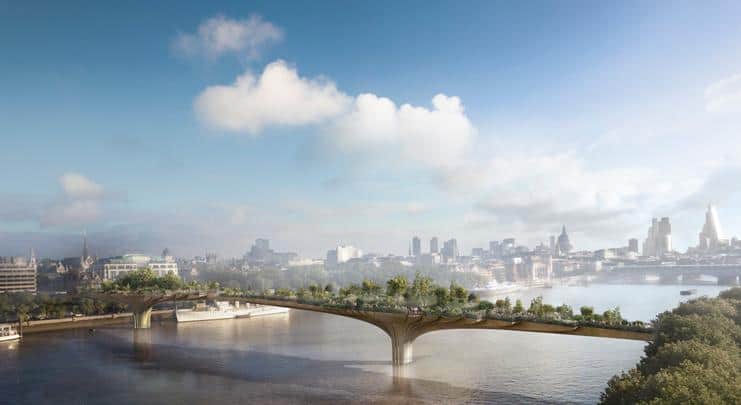 The City of London Corporation and has warned that Heatherwick Studio’s proposed garden bridge over the River Thames will obscure views of St Paul’s Cathedral from parts of the South Bank.

Meanwhile, the Middle Temple inn of court has expressed fears that the 366m link will funnel hordes of additional visitors on to its estate, damaging the area’s fabric and disturbing its top-lawyer tenants.

Planned as a public garden with trees, Heatherwick’s bridge would connect the London Television Centre with Temple Underground station, be up to 30 metres wide, and rise up to 14.5 metres above the Thames’ mean high-water mark.

The Garden Bridge Trust submitted planning applications for the £150 million structure to both Westminster and Lambeth councils earlier in the summer, and the project has the backing of both the Treasury and Transport for London.

But a consultation response from City of London chief planner and development director Annie Hampson argues that while the new bridge – located between Waterloo Bridge and Blackfriars Bridge – would offer new vantage points to view the river and the central London skyline, it would also “obstruct many existing views”

Hampson said the bridge would feature prominently in the foreground of views towards the City from Waterloo Bridge, but its height would mean that views from the South Bank between Waterloo Bridge and the new structure would be “significantly reduced or completely obstructed”.

She added that in addition to views of St Paul’s being protected by planning policy, views from Christopher Wren’s Monument were also protected and would be “significantly altered” by the new bridge.

Hampson concluded that while the new crossing could be seen as a public benefit to be weighed against the loss of views, measures were needed to ensure damage was kept to a minimum.

“We request that a maintenance plan is put in place to ensure that tree growth and planting does not obscure the views of St Paul’s Cathedral protected under St Paul’s Heights, Monument Views or London View Management Framework Mayoral strategic views,” she said.

Consultation responses received by Lambeth council included a preliminary submission on behalf of the Middle Temple, whose 2.43 ha estate lies north of the proposed bridge and includes a selection of listed buildings.

It warned that while the bridge plan was supported in principle, a projected daily footfall of 30,000 for the bridge was expected to damage the area’s “historic fabric”, create increased litter and disturb tenants in an area which is open but not a public right of way.

“The various assessments submitted with the application draw attention to the historic and unique environment of the Temple but there appear to be no provisions within the scope of the project to cater for the effect of increased visitors numbers on the surrounding area,” it said.

Lambeth indicated that its decision for the application could be made in the coming weeks, but Westminster has not published a target date.