It takes guts to build something extraordinary – have we lost the courage to dream? Asks Mary Keen

London seethes with innovation. Famous for writers and painters who break new ground, for fashion, music and design, this is the city where everyone wants to live.

Enthusiasm for the new is, of course, always retrospective. Most people only applaud something once they have got used to an idea. Thousands went online to predict disaster before the opening ceremony of the Olympics, but the execution of Danny Boyle’s aim: “to reveal how peculiar and contrary we are – and how there’s also, I hope, a warmth about us,” proved in the end, a triumph.

It is never easy to make a case in advance for something that is just extraordinary. In the 21st century, even in the creative arts, people have come to expect a watertight rationale. 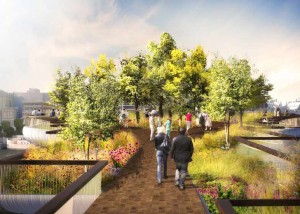 The Garden Bridge is a poetic and imaginative idea, first dreamed up by Joanna Lumley with Thomas Heatherwick to design the structure and Dan Pearson to plant the landscape. At any suggestion of this structure being built, disaster is increasingly predicted. The pundit voice calls loud, clear and killjoy.

Long before its construction, the Eiffel Tower provoked outrage, as did the London Eye. Both of these additions to cityscapes are today not just accepted, but admired and enjoyed. And centuries ago, when the new post-fire St Paul’s was built by Sir Christopher Wren, it was greeted with shrieks of horror.

Do we perhaps need to be braver about supporting eccentric art, now that we no longer have hugely rich patrons to pay for it? Does everything have to be worthy? Do we always need to count the financial cost of what might seem a crazy idea, if there is a chance that it will end up being enjoyed for centuries?

The critics have majored in unfavourable comparisons with the High Line in New York. They carp at the choice of site, and claim that St Paul’s will be hidden, rather than reframed. They say that the bridge is a waste of money, and that the garden will be no more than “urban parsley”.

What no one seems to have been fired up by, is the idea of a real garden that spans a river. The High Line flies over streets and passes buildings that were once warehouses which Hopper might have painted – but which are now boutique hotels. It is a remarkable and dramatic place, but less imaginative than the Garden Bridge, which is the stuff of dreams.

Dan Pearson is the man to make the dream come true. If you doubt his ability to create a sense of place on an impossible site, head for the approach to the Maggie’s Centre in Hammersmith. The building by architects Rogers Stirk has a garden by Dan. Here, next to a roaring road, a corridor of planting protects a calm green space.

The bridge occupies a much larger and more ambitious site than the Maggie’s Centre and it will be, in addition to a refuge, a proper garden. We have plenty of parks in London, places where people can exercise and escape from traffic, where the grass is well managed, the trees are beautiful and the bedding schemes brilliant, but high horticulture is not what parks do best. For that, the Londoner, or visitor to London, must head to Kew or the Chelsea Physic Garden.

Gardening is our national obsession. How thrilling to have a proper garden at the heart of London, planted by a man who trained first at Wisley and then at Kew and who has the artistry to create a place that will be more than the sum of its plants. Not a showy display of seasonal flowers, but a place to linger and, for those who are interested in horticulture, a place to learn, because there will be work for apprentices, as well as for volunteers.

Dan has gained valuable experience in what will survive salt-laden winds from designing a private garden on a headland in South Devon, but he says modestly that making mistakes is part of the process: “You can’t do this all by yourself.” Jim Gardiner, the Director of Horticulture at RHS Wisley, has been involved in scrutinising plant choices and is confident that the bridge will be a horticultural showcase.

The planting plans and lists are so varied and original, with bulbs such as Tulipa sprengeri and figs from Afghanistan, that close inspection will slow people to that head-down pace that only happens in an interesting garden. It will change from season to season and from year to year, as good gardens are bound to do.

The bridge will offer a series of radiating paths through plant colonies that lead to framed views. The different areas will be linked by native trees or shrubs – holly, box, hawthorn and yew – which will give a unity of design. As a hands-on gardener myself, I have complete confidence that the planting will work.

The bridge will enliven the great arc of the Aldwych, and will connect Covent Garden and the West End theatres to the newer cultural centre of the South Bank. The crossing begins at Temple where the Knights Templar gardened and which Shakespeare chose as the setting for the scene in Henry VI, when the roses of York and Lancaster are picked.

At the turn of the 19th century the RHS was based here; all these historic connections add resonance to the concept. The airborne garden ends on the South Bank, where Londoners once flocked to pleasure gardens and where market crops were cultivated.

It will be at the centre of London life and where people want to be. After the opening, there may be crowds, but not perhaps early in the day when commuters can start work with a refreshing walk across the river. Once it has become part of the fabric of the city the bridge will be useful as well as beautiful.

The only caveat is that of the £175m that the Garden Bridge will cost to create, £60m is to come from public funding. Of course there are worthier causes. Perhaps those of us who feel delighted by the idea of a garden in the air, a marriage of water, earth and sky, but who are uneasy with the inequality of life brought about by government cuts, should contribute to repaying that public money. The bridge will not be ticketed (this is a misapprehension) but I see no reason why grateful donations should not follow its completion. For which I can hardly wait.