Situated in the calendar between the spring flowers of the RHS Chelsea Flower Show and the summer colour of Hampton Court, is BBC Gardeners World Live and the RHS Birmingham Flower show that are run alongside each other. Many first time designers cut their teeth on this show before moving on to the London Shows, in subsequent years. 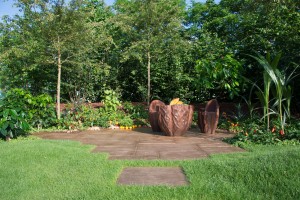 The best in show was won by Tony Smith of Hortus Infinitus with his garden Cocoa, taking its inspiration from Chocolate. Featuring a bubbling pool of what looked like chocolate, was an instant hit with the crowds. The design used the banked slope to its advantage, by bringing the seating area and surrounding garden up to eye level, where the golden paving was reminiscent of foil wrapped chocolate squares that sparkled in the bright sunlight. The planting was made up of many of the ingredients and flavourings that work with chocolate, but still combined to make an attractive garden.

Sited opposite was the World Vision Garden, ‘Grow Hope’, it was a much more challenging design, initially you were confronted with what looked like pots stood on grass, it was not until you went inside that the most impressive element was revealed; a box like structure mirrored top and bottom on the inside, providing an endless perspective. Possibly not a garden you would want to live with, but the use of mirrors in a garden could be taken away as an individual design element for a special location, in a larger garden. This garden also marked the anniversary of 30 years since the Ethiopian Famine in 1984. 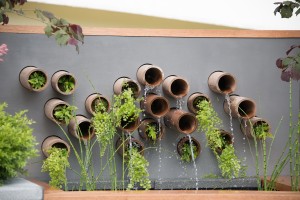 The Metamorphosis gardens are now in their third year, and challenge garden designers with in a set list of materials, and as opposed to many show gardens, a budget, that is within the grasp of many home owners.  Jo Jemmison’s ‘Hightened Senses’ garden, was awarded the best in show in this category, with its built in day bed it invited the owner of this garden to stop and relax, and to enjoy this space.

Next to Jo was the ‘Colour in Contrast’ garden by Charlie Bloom, in marked contrast to the soft muted colours at Chelsea this year, this garden delighted the public with its bold use of colour; from the yellow of Achillia and the vivid blue of Salvia, forming a low growing level, topped off with foxtail lily’s Erimurus and Kniphophia, forming a visual link between the planting the fountain that acted as the focal point of the garden.

The smallest gardens this year were to be found in the Beautiful Border category, these gardens show what can be achieved in a small space. The theme for this year’s border was ‘Birmingham’ with some of the borders picking up on the city’s well known rag trade heritage and its famous canals. Out of the 18 gardens, the Best Beautiful Border, was won by Tony Harding and Chris Cooper-Hayes, border entitled ‘Poets last stand’, this garden highlighted the work of the poets of the first world war, as well as the library of Birmingham’s extensive collection of war poetry, the attention to detail was fantastic. Right down to the poem written in the notebook that sat peacefully on a stump, lent against this stump was a upturned helmet, as if the poet had just walked away for a moment, only never to return. Andy Tudbury, stepped in to a vacant slot with only two weeks to go before show opening to create a garden designed as a place to sit and reflect, on the live lost after the start of the First World War.