A giant waterlily which has attracted thousands of visitors to Cambridge University’s Botanic Garden has started flowering – exclusively at night. 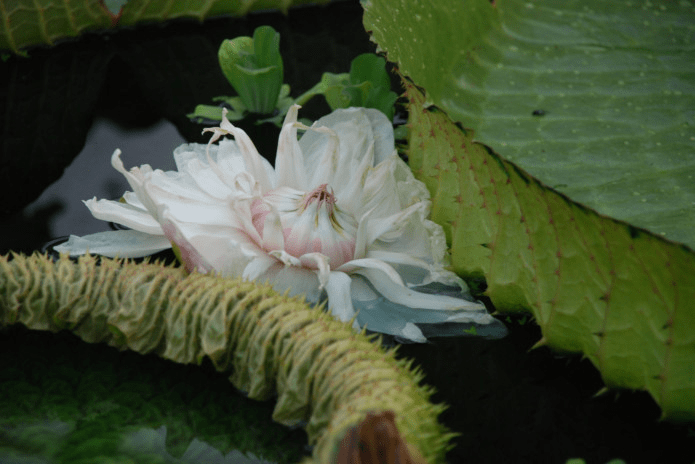 The Santa Cruz waterlily has been the star highlight of the attraction’s new Tropical Wetlands display since it opened to the public in May, and has been producing a succession of enormous, ferociously spined lilypads measuring up to 1.5m in diameter and with upturned rims of up to 20cm.

And now in its 12,000 gallon pool, the plant of the Paraguyan waterways is beginning to flower, sending up waxy blooms one after another.

The unique flowers open in the evening and last just 48 hours.

A garden spokeswoman said: “The many white petals unfold to provide a large and high-vis landing platform for scarab beetles which pollinate the plant in the wild. As the flower opens, its temperature increases by up to 20 degrees above the ambient which encourages the diffusion of an enticing pineapple scent, luring the unsuspecting scarab beetles with the promise of a nutritious, starchy feast held within the large floral chamber.

“All night the scarab beetles feast and as they do so, scatter pollen from the flower they visited the night before. As dawn breaks, the flower closes up preventing the scarab beetles scarpering to freedom. When the flower opens again that evening, the petals have become flushed pink and purple and the scent is lost, indicating that the flower no longer has receptive female parts but is now in an active male phase.”

As the beetles leave, they are loaded with pollen which they then carry to the next white, pineapple-scented flower in female phase, and cross-pollination takes place. Fertilised flowers then sink back below the water.

Staff expect the Santa Cruz lily to flower continuously from now until the autumn, but are planning to remove some of the flowers to ensure the plant’s energy is also used to continue producing the enormous lilypads.