Best in show went to Turton Tower’s kitchen garden group while a raft of gold, silver gilt and silver medals were awarded to other entries

Gold medals have been awarded to the best green-fingered creations sprucing up Manchester during the Dig the City festival.

A total of 22 gardens have bloomed up across the city’s shopping district, created by professional and amateur gardeners, community gardening groups and businesses.

Anna Harvey, part of the team at the historic Lancashire manor house, said: “I was stunned and absolutely thrilled on behalf of all the volunteers. All the planting was from our kitchen garden at Turton Tower. It was a lot of work, but we all really enjoyed the experience. In the end, the plants did their stuff and the garden was a huge success.”

Featuring kale, radish, lettuce and dill for their stimulating scent, taste and tactility as well as colourful sunflowers to attract insects, it will be relocated to the hospital’s own roof garden after the festival as a sensory space all patients can enjoy, regardless of illness or disability.

John, who tends to the hospital’s roof garden and also built his own miniature therapeutic garden on Ward 83, said: “Bringing the outdoors to those in hospital gives children a sense of normality, there are also known improvements to their health.

“Interaction with plants, combined with getting the sun on your face, means blood pressure can drop and muscle tone improves.”

Hannah Thomas, events manager at the hospital’s charity, added: “We are absolutely delighted to have won gold for our Playful Garden, it is the product of a lot of thoughtful planning from Sue and John, we couldn’t have done it without them. Their skills and knowledge of the therapeutic benefits of nature has enabled us to create a beautiful interactive entry which encourages children to explore their own imaginations.

“We are so pleased that we are able to relocate the entry to the hospital’s roof garden following the festival meaning that the garden can be enjoyed long after Dig the City finishes.

“As a Charity we work to make life easier for our young patients and their families. By bringing the beauty of nature to them it enables them to enjoy the benefits we often take for granted.”

Eight silver gilt medals and seven silver medals were also awarded to a host of other entries. 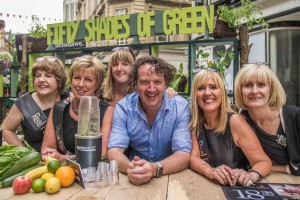