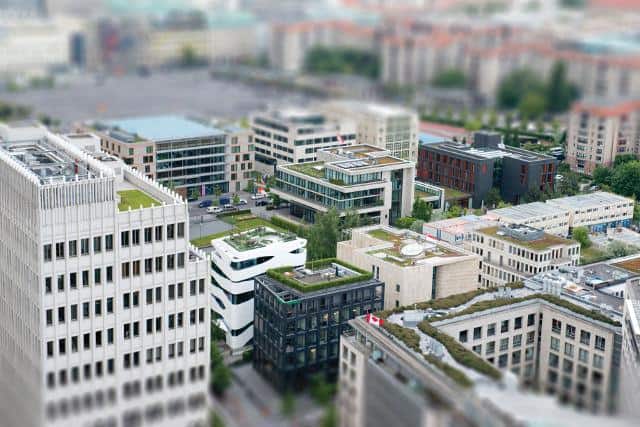 Berlin is made up of a patchwork of green roofs, with 8 per cent covered with vegetation

Green roofs and walls can reduce building energy bills and boost biodiversity while still being aesthetically pleasing – so why aren’t they more widespread in our cities?

Green roofs are not a new idea. The early Pictish inhabitants of Orkney and Shetland, the Inuit in Canada and Greenland, and the Vikings in Norway all embraced green roof technology in the form of sod houses to keep warm (ish) in winter and cool in summer. In 1920s Berlin, the designers of the Ufafabrik technical building – where films by the likes of Marlene Dietrich were processed and stored – specified a green roof to help cool the building and prevent the extremely flammable film of the day from causing fires. The roof required minimal maintenance right up until 1995 when it began to leak; the waterproof membrane under the roof was simply replaced.

Mention green roofs today and the image that springs to mind is that of a token Sedum-covered roof on an eco-building. “In the 1960s and 1970s green roofs grew out of the Green movement in Germany, it was seen as a good thing to be doing for the planet,” says Dusty Gedge of the Green Roof Consultancy who co-wrote ‘Living Roofs and Walls’, a technical report to support London’s 2008 Plan Policy. “Since then, green roofs have taken off in London at least.”

Green roofs come in several shapes and forms. The simplest is an extensive mixed Sedum roof, planted with several species of tough, drought-resistant succulents that store water in their fleshy leaves and are highly attractive to bees. These require only 8cm of rooting substrate for the shallow-rooted plants and minimal maintenance, though cannot be walked upon to any degree.

Extensive roofs need no irrigation and are the lightest of all vegetated roofs. Structural engineer Dave Rayment of London-based Morph Structures says: “Extensive green roofs are relatively lightweight – similar to a traditional flat roof with gravel – and so don’t have a big impact on the structural design of a building.” Over time, grasses, mosses, lichens and other plant seeds will be brought in on the wind and on bird’s feet and the extensive roof will form a mixed dry grassland habitat. “Dry grassland is a relatively rare habitat in the UK, and biodiverse roofs replicate many of the ecological characteristics of this habitat,” says Gedge, ecologist and urban biodiversity advocate. One of the largest of these roofs in Europe, at 32,000m2, was completed at the Rolls-Royce site in Goodwood, West Sussex, UK, in 2003, and designed by architect Sir Nicolas Grimshaw as a semi-sunken building in a former gravel pit. The green roof allows the building to blend into the sensitive natural landscape of the South Downs.

Aside from aesthetics, the roof has attracted the attentions of breeding pairs of ground-nesting skylarks who can raise broods there without interference from predators. “Costs start from £14/m2for liners, substrate and plants for an extensive roof that will take approximately three years to achieve 100 per cent surface plant cover. If that planting density is needed on day one, say for big opening impact, then costs rise substantially to approximately £35/m2,” says Martin Kuester of Optigruen Berlin, a leading installation company which has offshoots around the world.

Intensive green roofs are characterised by deeper soils of up to 100cm in places to accommodate heavier, more diverse plantings with trees or larger perennial plants and shrubs, and are usually designed to allow access to the occupants of the building – more of a rooftop park or garden.

They typically have more elaborate horticultural designs and may include water features or allotments for growing food or cultivating bees. They’re usually irrigated and require constant maintenance. The best examples capture rainfall runoff, reuse grey water from sinks and showers, and incorporate that into the irrigation system.

Expert landscape architects pre-grow trees for this environment in shallow containers, so that they develop a flat root ball, in the same substrate as they will be eventually planted in at roof level. Costs for these intensive roofs  start at about £50/m2.

These heavy green roofs need deeper roof joists and supporting beams, and care must be taken to ensure that the roof can carry the weight of a fully saturated system, or up to a metre or more of snow cover in winter depending on the geographic location.

Semi-intensive green roofs are a mixture of shallow-soiled extensive plantings – where budget is limited or the structure dictates lighter cover – and deeper planting media for greater variation where the roof can take greater loads. Maintenance levels are low.

The combined green roof and photovoltaic solar installation was first introduced in Berlin at UfaFabrik, the International Center for Culture and Ecology, in 1995.

Marco Schmidt, landscape architect at the Technical University of Berlin explains: “These hybrid roofs claim considerable benefits over ungreened photovoltaic roofs.  In addition to all the normal benefits of a green roof, many claim that the cooling effect of the transpiration from the plants has a positive effect on the performance of the solar panels during the summer by lowering the temperature around the panels. As researchers we have not been able to specifically measure this though.”

Schmidt is referring to the optimal operating temperatures for solar panels of around 25°C. A combination roof is also easier to install as the green roof itself can anchor the solar panels without requiring costly penetrative solutions, which may have to be deployed through the roof membrane and into the substructure. Schmidt is a bit of a green roof evangelist and believes that the solution to improving the uptake of green infrastructure is encapsulated in the phrase “Convince, legislate and educate”

The future is green…

Green, or living, walls are the most beautiful manifestation of green infrastructure in our cities, and they are both expensive to install – up to £600/m2 – and maintain.

Part of the reason for their greater expense is the need for irrigation and specific structures to hold and root the plants in place on a vertical surface. Plants that are used to growing on a horizontal surface must be carefully chosen. Not all will adapt and grow successfully.

Green walls are also not new – a patent was taken out in 1938 for a modular design for green wall installation – but are becoming more common as their benefits in helping to reduce urban flooding is recognised. They also have a role in shading or insulating buildings, depending on the elevation, orientation and time of year. Even cleverly planted Wisteria – a vigorous climber, can have an impact on the energy budget of a building by shading the walls and windows from full summer sun, and when leafless in winter allow sunlight onto the façade.

The aesthetic appeal of green walls is obvious if you observe the reactions of passersby, from the exterior of the Rubens Hotel in London to Patrick Blanc’s interior wall in the Dussmann Das KulturKaufhaus in Berlin, where people cluster alongside the rectangular pool that reflects the wall, collects the irrigation water and supports colonies of water plants. Like green roofs, they can also enhance the local environment by absorbing airborne particulate matter and dampening noise at street level.

More than just a pretty façade

Much of the early research on green roofs was conducted in Germany. Manfred Koehler began working on them in the 1980s  and still continues at the University of Applied Sciences in Neubrandenburg, north of Berlin, where he leads a team. Koelher, Professor of Landscape Architecture and president of the World Green Infrastructure Network, says: “Our history of research into green roofs and walls goes a long way to explaining why Germany has the highest density of green roofs in Europe, and we are adding about 10 million m2 a year. Berlin already has 8 per cent of its roofs greened, with a capacity to reach almost 50 per cent.”

On the campus roofs, Koelher’s team compares substrates from crushed brick to expanded coal, irrigation systems, plantings, different depths and weights of substrates with and without fertiliser.

Key to understanding the benefits of green roofs, particularly in slowing runoff from storms, is the use of embedded research lysimeters. These record rainfall input and water lost through runoff on various types of roof. The results are transmitted in real-time to waiting computers for analysis.

Green roofs are much better than non-urban systems such as grassland or forested areas at absorbing peak rainfall and slowly releasing the moisture via transpiration from the plants and surface evaporation. Actual runoff can be reduced to 30 per cent which, when released over hours rather than in a storm surge experienced from standard asphalt covered roofs, relieves pressure on drainage and sewerage systems.

“A green roof can be designed to provide attenuation for any large rainwater event using a storage layer and flow controls to limit flow off the roof,” says Steve Wilson, a chartered civil engineer at EPG Ltd.

In Berlin there is active legislation to encourage installation of green roofs in both new builds and refurbished buildings where the canal system is essentially at capacity in its ability to deal with storm water runoff.  Developers are required by the city water department to specify green roofs to prevent further pressure on the canal system.

It is this involvement of urban planners, developers and architects, combined with the forces of climate change, that drives the uptake of more green infrastructure. Tom Alexander, a senior architect at top London practice Aukett Swanke, believes that it takes leadership at a country level, through legislation, by companies and by people, to ensure that our urban environment becomes greener in the widest sense.

Developers and tenants alike are waking up to the value of green buildings. “Architects are interested in designing buildings that people want to live and work in. The built environment is all important to our general sense of wellbeing – who wouldn’t rather look out onto a green roof or wall, than a concrete, glass or brick expanse?” Alexander says.

“It will not be too long before London catches up with continental cities such as Berlin, which have had a bit of a head start being up to speed with green infrastructure building regulations well before the UK.

“Green roofs and walls are now integral parts of the green infrastructure, which helps to enhance the urban environment,” he adds. “Human beings are programmed to respond to greenness in a very fundamental and positive way, so more greening of our cities cannot be a bad thing.”