We speak to John Melmoe about why he’s supporting the Green Up Campaign and why he believes maintenance budgets need to be re-evaluated before supermarkets change their landscape. 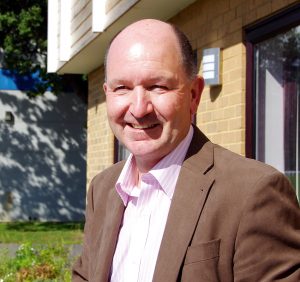 Why is the Green Up Campaign needed?

The majority of the superstores started being installed in around 1985. Led by Tesco, they rolled out a major construction programme throughout the late 80’s into the 90’s. They found that putting them in to a good standard and a high quality, they could actually assist and gain planning permission for the next stores. So they spent quite a bit of money on the landscaping around their stores. The problem is, they haven’t maintained them. The soft landscaping that was installed all those years ago hasn’t been maintained to a high standard, it’s been maintained to a price. The whole retail environment has changed, as we all know, but none of the supermarkets have changed any of their original plans – you rarely see a supermarket that’s upgraded its landscaping.

The initial install was capital expenditure, which was funded by head office, the maintenance is funded, generally, by the store and it comes down to the stores maintenance cost, so there’s very little incentive to the store manager to invest in maintaining his landscape to a high standard. A lot of the landscaping should be replaced and replenished as part of the original planning condition but a lot of stores need refurbishing frankly.

They redesign in store – you never see a store that looks tired internally. They rebrand on a regular basis, they alter aisles around, but they don’t do it in the external environment – why? It should be part of the branding. The vision should be the same for landscaping as it is for their signage.

What sort of innovative solutions are out there that we can incorporate?

You can put in wildflowers and things like that, but they are relatively short lived for the year. They look great for three or four months and then they peak. Replacing the existing shrub areas with some wildlife friendly plants, like buddleia for attracting butterflies, would be a lot better than the things we see at the moment.

There’s no easy fix. There’s no such thing as a maintenance free soft landscape unfortunately. There are things that can be done, but it has a cost and that’s what the stores need to lock into, that landscaping has a value but it also comes with a price tag.

What benefits can supermarkets gain from investing in landscaping?

They need to hold their client base. This is the whole thing about retail, it’s how long can they keep the customers interested?

How many supermarkets have a picnic area or coffee kiosk for families, to actually encourage them in and hold them in the stores? These are the types of things where I think they can, with a bit of initiative, actually have some of the areas redefined and then there would be some revenue coming back for them.

Now is the time for change, but change shouldn’t just be replacing like for like, they have to revaluate the whole space. Some of the landscaping will need to be reworked, but it has to be part of an overall design.

What experiences do you have personally?

We did over 400 of these superstores. Some of them the minimum spend was £100,000 but we’ve also worked on meadows at a big Marks and Spencer’s combined superstore at Camberley and that was over a million pounds. The Bluewater shopping centre was over £12m on the soft landscaping.

So, they do invest in sizeable funds, it’s the maintenance that’s the issue and revisiting the scheme. What was good in 1985-1990 is not good now, but they haven’t been back to revisit and rework the schemes to reflect the current times and customer’s needs.

The maintenance is now down to price. They’ve driven the cost down now so tight that it is ridiculous the amount of money that’s spent on maintenance, it’s so cheap it’s unbelievable. Originally how it used to work is you would maintain the scheme for a minimum of 2 months, maybe 2 years after the installation. That came at a price, and you had to be competitive as you always do, but that came as part of the install price. It’s where it goes adrift is when it goes out to the ongoing maintenance. The likes of Tesco have a term contractor for doing most of its stores and the volume of the business drives down the cost. But unfortunately, it is maintained to a price and not a standard and that’s the downfall of most the supermarkets.