Greenfingers visited the Earl Mountbatten Hospice on the Isle of Wight last week to begin the process of relocating Chairman Matthew Wilson’s award-winning Chelsea Flower Show garden to the hospice.

The Royal Bank of Canada Garden, designed by Matthew Wilson, is to be relocated to the Earl Mountbatten Hospice later this year with fundraising by Greenfingers to support the relocation now underway.  Key members of the project team, who will oversee the move, met on site last week to begin the process.

Earl Mountbatten was chosen as the proud recipient of the garden in recognition of its work developing services for children and their families on the Island. Although the hospice has previously focused mainly on adult hospice care, it is aiming to expand its offering to care for local children who need hospice care, along with their families.  The relocated garden will form part of the hospice’s offering to young patients giving them a beautifully designed outdoor space in which they can relax away from the rigours of their care.

The need for children’s hospice services on the island has been spearheaded by Gemma Blamire and Aaron Rolf, whose daughter Sophie was diagnosed with an inoperable brain tumour in 2012.  The provision of children’s care on the Isle of Wight, which the Chelsea garden will add to, is part of Sophie’s ongoing legacy to help other children with life limiting conditions.

Matthew Wilson, the garden designer and Greenfingers Chairman, said: “I’m thrilled to be here on the Island today to get the ball rolling on the relocation of my Chelsea Flower Show garden.  It means a huge amount to me personally that this garden is relocating to the Earl Mountbatten Hospice; the garden itself was a labour of love and through my work at Greenfingers providing beautiful outdoor spaces for those who spend time in hospices is very close to my heart. It has been great to be here today and I can’t wait to see the finished garden in all it’s glory in this fantastic location.”

Hospice Chief executive Nigel Hartley, said everyone at EMH felt very privileged to be part of such an exciting project: “It’s a real honour to be part of this and we know the garden will bring so much joy to everyone at Earl Mountbatten and indeed the wider community. It has been a pleasure to welcome Matthew and the team from Greenfingers to the Hospice today.” 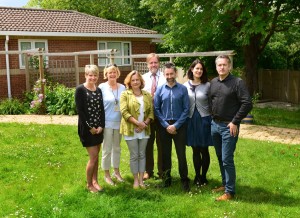