The design is inspired by a 1950s Hepworth textile design containing striking geometric shapes. The concept for the unique design, to be seen as part of Chelsea Fringe, comes from Rosie Irving, designed by Rosie Irving and Antonia Young.

Haddonstone has transformed the original Hepworth design to create a series of modular, three dimensional shapes in Portland and Slate colours to create the contrasting black and white colours displayed in the Barbara Hepworth textile design. The Portland elements are smooth, whilst the Slate elements have a defined textured surface.

Barbara Hepworth, a Yorkshire born sculptor, was one of Britain’s greatest artists. Born in 1903, Barbara Hepworth lived in St Ives from 1949 until her death 40 years ago in 1975. Chelsea Fringe will be a unique chance to get a first look at a sneak preview of the St Ives Modro System™ at Vauxhall One, before it takes up summer residence just across the river at Tate Britain for the ‘Barbara Hepworth: Sculpture for a Modern World’ exhibition, from 11 June – 2 September 2015.

Normally associated with classical and traditional designs, in recent years Haddonstone has developed a collection of art deco and cubist planters and has also worked with Robert A.M. Stern to create contemporary planters, pedestals, fountains and fireplaces. The designs created for ‘Hortus non Conclusus’ will join Haddonstone’s contemporary collection as the new St Ives Modro System™, allowing designers, developers and private clients to enhance any open space with a robust design – whether a private garden, public park, commercial or residential development. 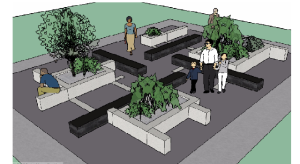