A charity is to be set up to build and maintain the proposed Garden Bridge across the Thames between the South Bank and Victoria Embankment. 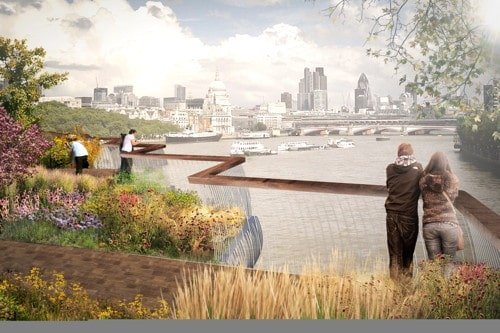 Further details of the scheme have emerged in a briefing paper for members of Transport for London’s finance and policy committee.

Plans for the pedestrian bridge designed by Thomas Heatherwick and backed by Joanna Lumley were revealed last month.

The structure – which would be covered in trees and plants – would be situated mid-way between Blackfriars Bridge and Waterloo Bridge.

Transport commissioner Sir Peter Hendy recently claimed that there is “significant interest” from sponsors in contributing to the costs of project.

Now TfL board members are being asked to approve the expenditure of £4 million of public money on preparatory work for the project.

The report prepared for committee members notes that Mayor of London Boris Johnson has asked TfL to develop plans for the bridge and act as an ‘enabler’ for an independent charity which will take the project forward.

“There is no intention that TfL takes ownership of the structure, or responsibility for its ongoing operation and maintenance,” says the briefing paper.

The proposed bridge will have “significant” running costs – including the employment of gardeners – estimated at £3 million to £5 million a year. Security staff may also be hired to patrol the bridge.

Public consultation on the bridge will be launched in October this year, with TfL hopeful that planning permission will be granted by Lambeth Council and the City of Westminster in a year’s time.

Arup – the engineers who built the ‘wobbly’ Millennium Bridge – have been brought in to work on the project with Dan Pearson providing garden design.

TfL and the Port of London Authority are anxious to get works under way before Thames Water’s ‘super sewer’ begins major operations on the foreshore near Blackfriars Bridge.

If the project is approved the bridge could be complete in spring 2017.

Joanna Lumley has been promoting the idea of a bridge at this location for more than a decade. In 2002 she told then Mayor Ken Livingstone that it should be named the ‘Diana Bridge’ in memory of Diana, Princess of Wales.