A hedgehog-friendly garden which shows nature lovers how to help the spiky species is featuring among the exhibits at Hampton Court Palace Flower Show. 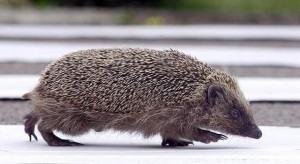 The “Hedgehog Street” garden aims to raise awareness of the plight of the threatened mammals, whose populations have plummeted by more than a third in the last 10 years, and how to help them, the conservationists behind the display said.

The garden is one of many exhibits at this year’s Royal Horticultural Society (RHS) Hampton Court Flower Show, which also features turf sculptures, a floating rose crafted from cranberries and a luxury tree-house.

The RHS show includes gardens commemorating the First World War, a theme that was featured at the Chelsea Flower Show earlier in the summer, and an exhibit celebrating 50 years of Britain in Bloom.

There will even be an “invisible garden” exhibit which allows people to discover the microscopic wildlife in their gardens.

The hedgehog summer garden will feature elements that are beneficial to hedgehogs, as one of the factors which has contributed to their decline is tidy, fenced-in gardens which do not allow them to roam around and find food.

The British Hedgehog Preservation Society (BHPS) and the People’s Trust for Endangered Species (PTES) are behind the garden, which has been created by designer Tracy Foster.

The wildlife charities say one of the simplest ways of helping hedgehogs is to link gardens up by getting together with the neighbours to make a small hole in their fence or other boundary to help the wild animals roam freely.

Fay Vass, chief executive of BHPS, said: “The decline of hedgehogs can be attributed to a number of environmental factors, including neat and tidy gardens that are isolated from one another by fences or walls, preventing hedgehogs from finding shelter, food and mates.

“The average range for a hedgehog in an urban area covers about 500 gardens, so we need people to help these iconic creatures by joining up their gardens.”

Jill Nelson, chief executive of PTES, said: “The hedgehog is known as the ‘gardener’s friend’ and by creating a summer garden at RHS Hampton Court Palace Flower Show we hope to prove to professional and amateur gardeners alike that it is easy and inexpensive to create a hedgehog-friendly space, no matter what type of garden you have, whether modern and contemporary or wild and rustic.”