This week, Pro Landscaper sits with Robert Frier, garden designer at Charlesworth Design to discover some creative ways landscapers can reduce costs and do more for the environment with recycled materials.

I guess the Yorkshire blood in my genes is why I have always been one for re-using and recycling. For many years I’ve always had the satisfaction of making my own compost. To get something free of charge for very little effort I think is most rewarding.

Client’s like it if you can use things that are already a part of their garden – it goes towards keeping the integrity of the garden. It also gains you brownie points, increases credibility and saves them money.

I hate to see skips on front drives bound for the tip full of topsoil mixed in with all sorts,

just because it is easier not to deal with the problem. I would rather people began to think outside the skip and see what can be re-used.

At the RHS Tatton Show – way back in 2003 I used composite decks to imitate lily pads floating on the water for my Astrazeneca garden.

The concept was unheard of then and I felt proud to have been one of the first innovators. The boards were made of recycled carrier bags and sawdust. One of the floating decks needed about a ton of foam underneath to keep it afloat which rather defeated the object.

Rather than edge my pool with stone, I chose to use upturned turves laid over the pond liner. This gave a very natural looking edge, cost nothing and concealed the liner.

Working on a garden in Hale we came across old flagstones laid in the lawn which had to go. Some were cracked, but the cracks revealed a speckled aggregate within. I thought this resembled the candy bars of old and the client confirmed he thought so too. So rather than skip these, we dropped them from a height, and used the cracked edges as the ‘face’ to the gabion wall.

My contractor then challenged me to try and re-use the old Imperial sized flagstones in a modern setting. Not just the dull grey ones, but the pink as well!

We lifted, cleaned and re-laid them on 45 degrees with narrow mortar joints. Then we edged them with brick and boarded to match the recycled boards in the house. Only three materials were used, wood, brick and paving – nothing more. 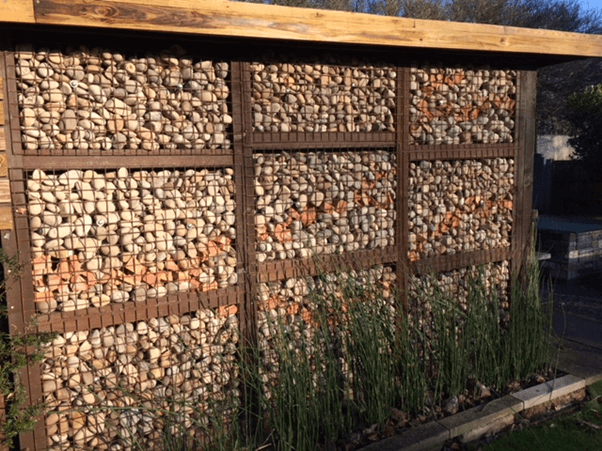 We have rescued tiles, brick, slate, wood, concrete and rope edging from becoming landfill, using these materials to create a talking point bench. The was part of a set of four – none of which match!

All over the Yorkshire moors are drystone walls. Some are abandoned, and the stone is plentiful, so we bought the broken walling stone. Instead of laying it vertically as a wall, we laid it horizontally to reinstate the millrace of this former Yorkshire mill. 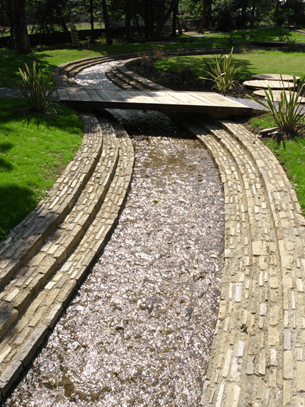 Repeating materials used on (or in) the house really anchors the house to the outdoor space. We often use sanded scaffolding boards outside the house to match the floorboards within. We will strip a lawn and lay the upturned turves face down at the bottom of raised beds and borders.

Taking materials off site is expensive. Whereas, looking at ways at reusing things opens all sort of possibilities.

Bob Flowerdew once suggested one of the best activators to speed up the composting process is applying recycled beer or cider to the compost heap. So, enjoy a pint or two in the knowledge that you are doing something good and remember to recycle it in whatever way is most convenient!