Indoor Garden Design has really been making the most of time in lockdown by finding ways of supporting Team IGD and the wider community.

After launching IGD Community back in March, the first initiative was to support Project Wingman which was set up by a group of airline crew across the UK with the aim of providing first class lounges in hospitals for frontline NHS staff to unwind and de-stress. IGD donated plants and landscaped the lounges. Every coffee table had a complimentary copy of Ian Drummond’s book ‘At Home With Plants‘.

IGD held charity plant sales where profits went to Project Wingman, and a virtual RHS Chelsea Flower Show plant sell off with profits going to the Chelsea Pensioners. There was also a virtual charity collection throughout March and April for Marie Curie, IGD’s charity of the year.

Team IGD had a good sort out at headquarters and found a number of second hand ceramic planters, which were planted up with summer bedding plants and donated to communities within central London to brighten up urban areas during these tough times. 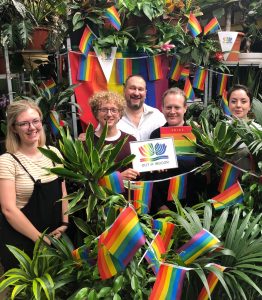 IGD Welfare was also established with the aim of supporting Team IGD. A big part of this has been keeping the team connected with daily virtual coffee mornings and weekly virtual pub nights and quizzes, as well as a virtual Pride party for [email protected]. Alongside this IGD Grow Your Own was set up to support Team IGD by growing their own produce; everything from a tomato plant on a window ledge, pots of potatoes on a balcony, right up to a few of the guys having their own allotments.

Indoor Garden Design Family has also just been launched to connect past and present staff together through a page on Facebook where they can share experiences and advice for each other.

IGD has now become partners of Perennial which has done such a wonderful job during these difficult times.

Ian Drummond, creative director of Indoor Garden Design, says: “I am delighted to see the really positive impact these initiatives have had on the team and the wider community during these challenging and uncertain times. Our team has really stepped up and gone above and beyond.”