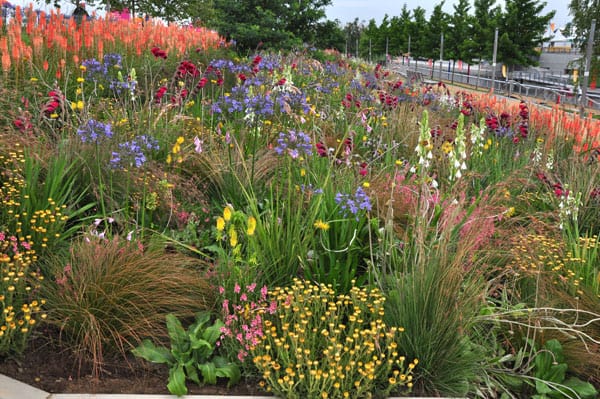 Professor James Hitchmough, 2012 Olympic Park designer, has been back to the Royal Horticultural Society (RHS) flagship garden in Surrey, RHS Garden Wisley, to sow a South African meadow, as inspired by his ‘World Gardens’ at the Olympic Park at Stratford, London. The South African meadow is growing by the Glasshouse at Wisley and is the newest feature to this now-established landscape.

The seed-sown meadow will flower in its initial year; by August 2013 it will be a haze of pink Diascia integerrima that will complement the established American Prairie Meadow nearby, on which James also worked. The South African Meadow will change and develop in subsequent years but will be fully established within three years to give the same impact of that experienced at the Olympic Park.

More-experimental plants in the mix include Watsonia, Aloe cooperi, Aloe boylei and Helichrysum splendidum. As these would not be considered hardy by UK standards, it will be interesting to see if they take to our climate.

James is at the forefront of naturalistic herbaceous vegetation for use in urban parks and green spaces, and heads up a research team at the University of Sheffield. He will be coming back to Wisley throughout the year to see how the meadow is progressing.

Sean Harkin, leader of the Herbaceous Ornamental horticultural team at RHS Garden Wisley, comments: “It has been an absolute delight to work with James at Wisley again. James really is an inspiration to this style of planting and I was blown away by his work at last year’s Olympics. Our new meadow will fit in perfectly with the Glasshouse landscape and should be a must-see for anyone visiting the garden this summer and in subsequent years.”

Having been planted by seed, the South African meadow is environmentally friendly due to its low carbon footprint.

Construction output falls by 2% in April