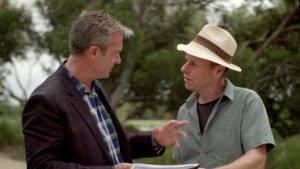 Garden designer Joe Swift is a well known face amongst the nation’s green fingered community, presenting BBC Gardeners’ World amongst other things. He has recently been over to Australia, a place that has influenced his work ever since spending time there in his early twenties.

“I remember working in residential gardens quite a lot and there was a much more contemporary edge. It was all about using the space. It got me thinking in a forward manner when I got back to the UK. As soon as I started designing there was a whole movement about contemporary city gardens, so after working in Sydney and Melbourne those influences became quite apparent in my design work.”

Recently at the RHS Hampton Court Palace Flower Show the Essence of Australia show garden was awarded Best in Show and a Gold Medal.  Jim spent some time with the man behind the garden – award-winning landscape designer Jim Fogarty – whilst in Australia.

“There has been a real legacy of Australian show gardens in the UK. They just stand out and are very different from British gardens They seem to be pioneering, like the Australian people. The landscape in Australia  is so mixed and varied that a designer has to distil that into a garden design and use the native plants and materials – they have a very distinct quality”