When Kamelia Bin Zaal recently flew to Alicante, Spain, for her second European plant-hunting trip in as many months, she embarked on a very specific mission.

Bin Zaal’s goal was not only to find the trees that would provide the wow-factor for The Beauty of Islam, her entry for the forthcoming 2015 Royal Horticultural Society (RHS) Chelsea Flower Show, but also to unearth the plants that might even help her win the competition’s ultimate prize.

Bin Zaal will celebrate a triple debut when she unveils her garden to the RHS judges on May 19. Not only will it be the first time that Bin Zaal and her sponsor, Dubai’s Al Barari Firm Management, have submitted a garden to the world’s most prestigious horticultural event, but The Beauty of Islam will also be the first Chelsea show garden to have been designed by an Emirati. It’s a prospect that Bin Zaal looks forward to with a mixture of nerves and excitement.

“This is the gardening equivalent of the Oscars,” the Dubai- based designer explains.

Following an earlier trip to the Netherlands, where she ­went shopping for palms, Bin Zaal’s most recent trip allowed just four days to visit the finest nurseries in southern Spain to locate citrus, pomegranate and olive trees that will provide the living “structure” for her design.

It was a process, Bin Zaal admits, that initially made her feel like “a kid in a candy store”, but ended up feeling like a particularly intense session of last-minute Christmas shopping. “For me, plants are always an inspiration, and I can start seeing a garden just by looking at a single plant. We went to six or seven different nurseries [in the Netherlands] looking for palms and specimen trees. They were in these incredible greenhouses that were about 27 metres high, with enormous 20 metre-high palms inside them. It was amazing.

“I actually had visions of other gardens going through my mind, because I could see all these palms that I wasn’t using and I thought: ‘Oh my God, who else wants to sponsor me for Chelsea next year?’”

Unfortunately, even extraordinary plants fail to make the grade at the world’s most prestigious gardening competition – for those who are serious about passing muster, only the rarest specimens will do.

“Normally, in most gardens, there are one or two trees that really stand out. We call them ‘hero trees’ and they’re the pivot around which the whole garden revolves,” explains the ­appropriately named Dave Root, the man responsible for finding and growing all of the plants for The Beauty of Islam.

The owner of Kelways, one of the United Kingdom’s oldest nurseries and one of only four firms to have exhibited continuously at Chelsea since the first flower show in 1913, Root has been growing and sourcing plants for Chelsea show gardens since 2008. “‘Hero trees’ are not off-the-peg, so we basically scour the UK and Northern and Southern Europe to find specimens that meet our client’s specification,” the British nurseryman explains.

Root is providing the plants for seven Chelsea gardens this year, but his record for any one competition year stands at 10. “We’ve become particularly known at Chelsea for dealing with plants with a particular provenance, that come from a particular country or region, and for very difficult plant-sourcing jobs. My skill is knowing where to find those plants in the first place and I then do the legwork to narrow down the search. One of my main roles is to manage the designer’s expectations and to make them aware of just what’s achievable.” 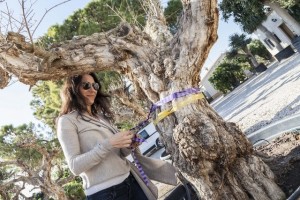