An award-winning 2018 Chelsea garden designed by Kate Gould has opened just off London’s world-famous Oxford Street (on Old Quebec Street). The garden has been adapted and moved to the heart of the West End from the RHS Chelsea Flower Show.

The Wild West End Garden forms the latest new green space under the banner of Wild West End, a collaboration between the area’s businesses to improve biodiversity and air quality and promote happiness and wellbeing, all of which is associated with greening the urban environment. 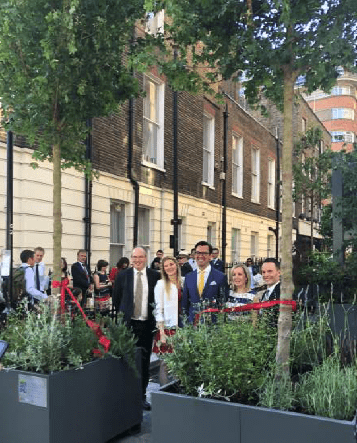 The Wild West End Garden, which won a gold medal in the Spaces to Grow category at Chelsea Flower Show last month, has been moved to Old Quebec Street in London’s West End to provide a tranquil, green oasis to visitors to the retail and leisure destination. It was created through a partnership between New West End Company, Europe’s largest retail-led business partnership, The Portman Estate, Baker Street Quarter Partnership and Marble Arch BID and Wild West End.

Kate has a real passion for greening urban spaces and jumped at the opportunity to design another Chelsea garden which focused on the theme of creating a calm, tranquil and healthier space in the heart of London’s busiest shopping district. The plan of re-homing the garden after the show made this project even more attractive giving the collaboration an extra dimension and real purpose. Kate’s knowledge and love of plants has shone through with a wide variety of evergreens as well as flowering plants and trees being used.

All varieties (eg. Acer ginnala, Cornus kousa, Crataegus ‘Paul’s Scarlet’, Heptacodium miconioides) have been chosen for their pollution and CO2 absorption properties to create cleaner air for visitors to the garden. With London often cited as having one of the poorest records of air quality in Europe (studies show over 9,000 people die early each year in London due to poor air quality) the new garden will also help the West End in meeting this challenge.

Finally, the new garden will be a biodiverse haven in the centre of one of the world’s most bustling urban environments. Baseline surveys on the wider WildWest End project have shown bird and bat species like the Black Redstart, the Starling and Leisler’s Bat (all of which are rare and of a high conservation priority) all taking residence in London’s West End due to the area’s growing range of green spaces and habitats.

The garden will regenerate the streetscape on Old Quebec Street and create a unique visitor experience for the 142 million people that visit Oxford Street’s 260 flagship stores each year, especially given the strong link between green space and wellbeing.

Kate Gould, Kate Gould Gardens said: “I feel privileged to have been asked to be a small part of the greening of London, many of the gardens I have put on the showground at Chelsea have been related to this theme as I feel it is imperative to create healthier spaces for people living in and frequenting the city.

“I hope the garden thrives, is well used and helps to improve the air quality for visitors and residents of the West End for the time it will be spending in this space.”