Kelways Plants, one of the oldest nurseries in the UK who have been exhibiting at RHS shows since 1880 are preparing for their greatest duo of exhibits at the Chelsea Flower Show ever. They will cover over 60m2 of that hallowed turf in the Grand Pavilion.

Best known for their peonies, Kelways 2015 exhibit will showcase some of the more recent hybrids of the Intersectional Group. These wonderful plants, crosses between tree peonies and herbaceous peonies, have lustrous green foliage, a neat bushy habit and large blooms in an extraordinary range of colours. Hilary with enormous apricot blooms is a showstopper. Callie’s Memory has semi-double flowers of buff orange with dark red flares. Lollipop is a crazy pale yellow bloom, splattered randomly with deep-pink paint splashes. “After recently being showcased by Charlie Dimmock on the Great British Garden Revival, it will be great to bring these fantastic garden plants to Chelsea” says Dave.

Kelways tree peonies will take on a fresh twist for the 2015 show. They will be displayed in the style of a Japanese peony garden where paper parasols would be placed above the plants protecting them from both the midday sun and the snow. This part of the exhibit will even be covered in artificial snow for added authenticity, and also a touch of fun!

Alongside their floral extravaganza of peonies and irises will be Kelways first ever exhibit of tree ferns, representing Australasia in the Floral Continents area of the Grand Pavilion. The exhibit will be staged amongst a grove of slender eucalyptus trees which will tower to 6m nearly touching the roof of the Grand Pavilion. Kelways intend showing at least 15 species of tree ferns, including the rare Cyathea robusta from Lord Howe Island, and some beautiful and slender Cyathea cunninghamii, the Gully Fern from both Australia and New Zealand. The exhibit will also feature the Silver Tree Fern Cyathea dealbata, the National Emblem of New Zealand, with its incredible silver fronds.

Leading Kelways Tree Fern exhibit will be Dave’s apprentice Rob Parsons, who at just 20 years old will be the youngest exhibitor at the 2015 Show. “I am so excited to give Rob the opportunity to create what has been my personal Chelsea dream for over 20 years” says Dave, “Rob is supremely passionate about his tree ferns, and it is so refreshing to nurture and encourage young talent in the horticultural industry.”

Slightly older, but at just 23 is Gary House, Kelways Nursery manager; the young man responsible for looking after all the plants for the 7 Gardens for which Kelways are the main plant supplier, 21,000 plants in all. Working with Dave, it’s a huge responsibility but a challenge that Gary and the team at Kelways rise to every year. Kelways Chelsea clients this year are Ruth Willmott, Darren Hawkes, Charlie Albone, Sarah Eberle, Adam Frost, James Basson, and Kamelia Bin Zaal. “Wow, what a line-up” says Dave. “The gardens at Chelsea 2015 will be some of the most diverse that have been seen in recent years; four of our designers are new to Main Avenue, which is even more exciting!” 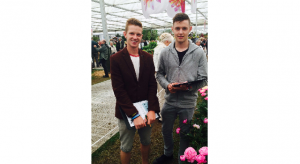