Temperate House at Kew Gardens, the world’s largest Victorian greenhouse, is to close this week for a five-year restoration costing more than £34 million. 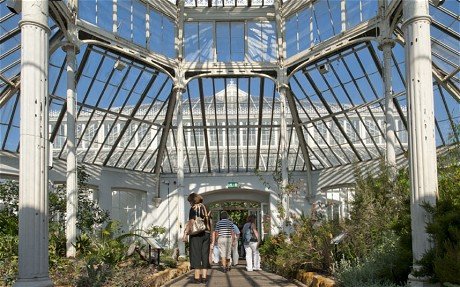 It’s your last chance to visit the Temperate House at Kew Royal Botanic Gardens in south-west London, which closes at 7.30pm on Sunday 4 August for a five-year restoration. This major overhaul of the world’s largest surviving Victorian glasshouse, dating from 1863, will cost more than £34 million, and involves the replacement of all glass panels, repainting of struts and raising the entire roof.

Some of our most useful plants are to be found there, including the tea bush (Camellia sinensis), quinine tree (Cinchona officinalis), historically used to treat malaria, and St Helena ebony (Trochetiopsis ebenus). For more than a century this plant was thought to be extinct, until two specimens were found growing in the wild on the South Atlantic island.

The vast and graceful structure is still laid out according to the original scheme of its architect, Decimus Burton, with the south wing hosting African plants, the rectangular hall containing sub-tropical trees, and the north wing home to the temperate plants of Australasia.

Visitors can learn how the collection will be cared for and expanded during the restoration. Most of the plants have been potted up in preparation for the move, and can still be seen in situ. Others will remain in place throughout the overhaul, including the extremely rare cycad Encephalartos woodii, which is no longer found in the wild and is too fragile to move.

Don’t miss out on this final opportunity to see all the world’s plants in one place before the glasshouse reopens in May 2018. Visit kew.org for further details.