The following is an excerpt from The Landscape Imagination: The Collected Essays of James Corner 1990–2010 by James Corner. In this passage, Corner discusses the work of John Dixon Hunt, and the qualities of Hunt’s work that he seeks to incorporate into his own (including his firm’s – James Corner Field Operations – redesign of the New York High Line).

Over the past two decades, James Corner has reinvented the field of landscape architecture. His highly influential writings of the 1990s, included in our bestselling Recovering Landscape, together with a post-millennial series of built projects, such as New York’s celebrated High Line, prove that the best way to address the problems facing our cities is to embrace their industrial past. Collecting Corner’s written scholarship from the early 1990s through 2010, The Landscape Imagination addresses critical issues in landscape architecture and reflects on how his writings have informed the built work of his thriving New York based practice, Field Operations.

Hunt’s Haunts: History, Reception, and Criticism on the Design of the High Line

By “Hunt’s Haunts,” I am referring to the writings of John Dixon Hunt and the many discussions I have had with him over the years that have lingered with me in ways deeply enriching and, at the same time, oddly disquieting. After all, good criticism and difficult conceptual frameworks inevitably pose a challenge—one that can often agitate and haunt one’s sense of direction if left unresolved.

This same point regarding the reception of fecund and challenging ideas could also be said of some of Hunt’s favorite physical haunts—some of the great gardens and places from which he has derived inspiration and about which his work is focused. Such places include Stowe, Stourhead, Bomarzo, the melancholic and hidden gardens of Venice, and the many others that have gifted him the feeling of a “greater perfection.” As he has written, such places are “haunted by undeniable spirits, [wherein] the environment can become landscape.” By spirits, of course, he refers not to some mystical essence but rather to the human mind—to the imagination, to the fictions and designs that create a place of lasting presence, a presence that inevitably haunts precisely because of effects that tend to linger and escape any form of easy definition.

Good gardens haunt precisely because they inevitably exceed being thought. This phenomena of haunting excess—both as place and idea, and as developed through Hunt’s writing on the subject—is both inspiring and elusive. It is a fascinating and fundamental topic of all art. Outlined here are three recurrent haunts in Hunt’s work that I find particularly relevant for my own. In this context, I will use some images of the High Line project to suggest a certain striving in real-world practice to try and approximate certain ideas. 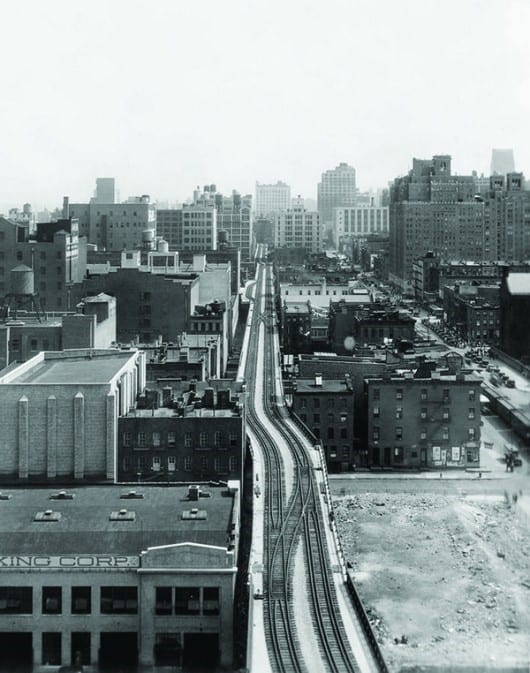 First, is Hunt’s work on site, the haunts themselves. Hunt has constructed an almost unassailable argument that the specificity of sites lies at the very core of any significant works of landscape architecture. In this vein, he has elaborated on key concepts such as the “genius of the place,” “reading and writing the site,” “placemaking as an art of milieu,” “site mediation,” and the nesting of “three natures” wherein the garden (third nature) is a focused concentration of its larger surroundings. A close reading of a particular site’s attributes—its history, its various representations, its context, and its potentials—conspires to inform a new project that is in some way an intensification and enrichment of place. Every site is an accumulation of local forces over time, and so, Hunt argues, any significant design response must in some way interpret, extend, and amplify this potential within its specific context. Averse to universal and stylistic approaches to design, Hunt demands inventive originality with regard to specific circumstance. In the case of the High Line, a very close reading was made of the site’s history and urban context. Two readings were particularly formative—one was the singular, autonomous quality of the transportation engineering infrastructure (its linearity and repetition, indifferent to surrounding context, and its brash steel and concrete palette), and the other was the surprising and charming effect of self-sown vegetation taking over the postindustrial structure once the trains had stopped running—a kind of melancholia captured beautifully in earlier photographs made by the artist Joel Sternfeld. These photographs were later used to great effect by those who sought the preservation of the structure in the face of impending demolition. 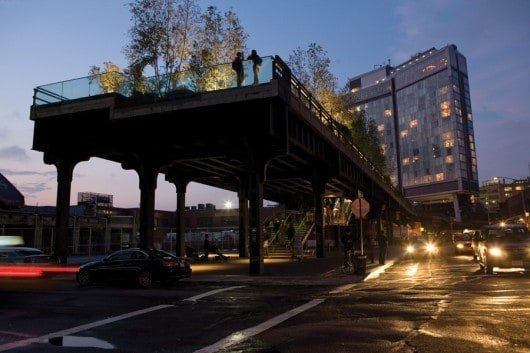 The new design of the site, from its material systems (the lineal paving, the reinstallation of the rail tracks, the plantings, the lighting, the furnishing, the railings, etc.) to the choreography of movement; the meandering of paths, the siting of overlooks and vistas, and the coordination of seating and social spaces, is intended to reinterpret, amplify, dramatize, and concentrate these readings of the site. The design is highly site-specific; it is irreproducible anywhere else without significant loss of origin and locality, partly owing to the history of the High Line itself, and partly to the unique characteristics of its urban context and adjacencies. The design aims to concentrate these found conditions, to dramatize and reveal past, present, and future contexts, and to create a memorable place for all who visit.

This brings me to a second theme of Hunt’s Haunts, the concern for reception. Over the past few years, Hunt has brought into sharper focus the importance for how a visitor receives a given work—how they experience, understand, value, and extend various interpretations of the work. He says that “landscape comes into being as the creative coupling of perceiving subject and an object perceived.” 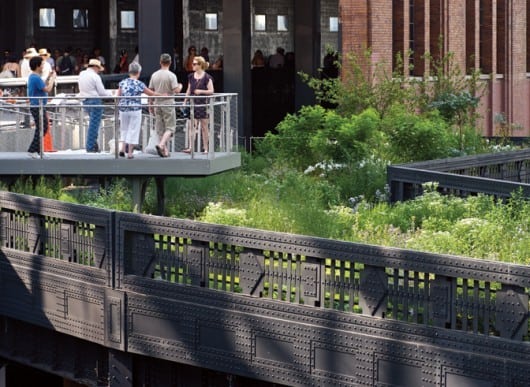 As a landscape architect, it is very difficult to believe that a designed work can determine a particular behavioral response; a good designer can at best influence, steer, or guide a particular set of responses, but can never overdetermine or script reception. Hunt recognizes such a distinction in statements, such as, after W. H. Auden, that “a poet, especially a dead one, cannot control how we read and understand his poetry, but that—especially if it is good—we will constantly reread it in new ways; so even when later generations repeat the very same words that W. B. Yeats originally published, they will probably give them new meanings and new resonance.” He continues the analogy: “When we are dealing with materials in a garden that have neither denotative basis (as words do in the first instance) nor precise declarations of idea or emotion, there is considerably more scope for reinvesting them with meanings, for seeing them in different ways than were originally intended or anticipated.” Thus, he suggests that a good design must harbor sufficient room for a wide range of receptions and interpretations, if not actually instigate, prompt, and support open and indeterminate readings. As he quite rightly points out,

here is the palpable, haptic place, smelling, sounding, catching the eye; then there is the sense of an invented or special place, this invention resulting from the creation of richer and fuller experiences than would be possible, at least in such completeness or intensity, if they were not designed. Like cyberspace, a designed landscape is always at bottom a fiction, a contrivance—yet its hold on our imagination will derive, paradoxically, from the actual materiality of its invented sceneries.”

From such ideas, Hunt develops the concept of the longue durée, the long duration, the slow accrual of experience and meaning over time. Possibly one of the most fundamental, important, and difficult criteria for landscape architecture is the fact that the medium is bound into time. There can be no immediacy of appreciation, no fast way to consume landscape in any meaningful or lasting way. Landscapes can never be properly captured in a single moment; they are always in a process of becoming, as in a temporal quarry of accrual and memory collecting experiences, representations, uses, the effects of weather, changes in management, cultivation and care, and other traces of layered presence. In the case of the High Line, the experience of strolling is intentionally slowed down in the otherwise bustling context of Manhattan. Paths meandering in between tall perennial and grass plantings create an experience that can not really be properly captured in a photograph, or even video. Like so many other gardens, the place must be walked, with scenes unfolding in sequence and in juxtaposition. The dynamic plantings are different from week to week, with varied blooms, colors, textures, effects, and moods, combined with the changing light at different times of day, varied weathers and seasons, and with the different microclimatic effects of the surrounding cityscape. The visitor is almost always experiencing the High Line in newly nuanced ways. 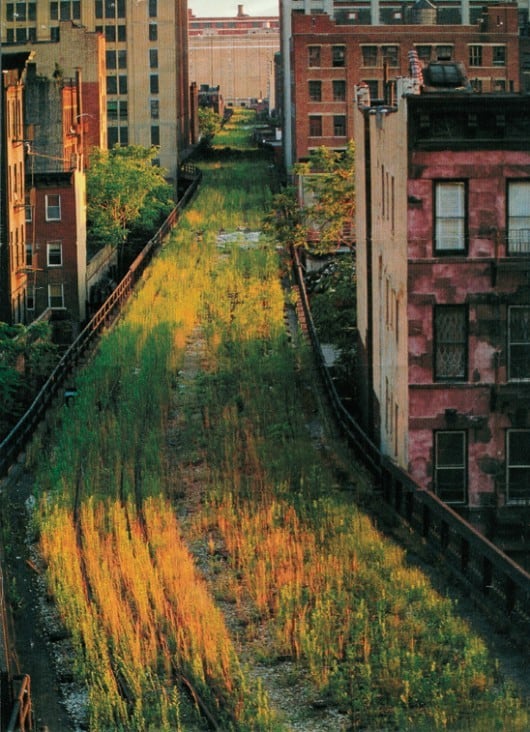 Importantly, the design does not employ signs or symbols of narrative intent, it does not try to tell a story or to embed meaning—rather, its very materiality, its detailing, its artifactuality elicits or prompts different associations and readings. Hunt has spoken in numerous essays of triggers and prompts in design, describing a number of theatrical devices such as entry thresholds and liminality, the passage from outside to inside, dramatic frames and scenes, displacement and collage, inscription and marking. These precisely designed triggers and prompts are all concentrations of effect that draw the visitor into another world, heightening the allure and distinctiveness of a special place. The visitor becomes as much a performer as viewer, more deeply engaged in participating in the theatricality of urban life—the promenade as elevated catwalk, urban stage, and social condenser.

And here words bring us to the third haunt of Hunt, the critical. When he declares that “to theorize about gardens is justifiable for its own sake; moreover it increases the pleasures of understanding,” he is establishing the basis not simply for passive contemplation but for actively energizing fresh developments in the ideas and practices of landscape architecture. His insistence on historical perspective is well taken, but his commitment to concepts, to critical discourse, to informed argumentation, and—most important—to cultural enrichment through imaginative and inventive placemaking continues to challenge us all.

Hunt’s haunts are quite simply those remarkable places and ideas where content concentrates, lingers, and accrues. The combination of physical, material places with cultural ideas points to the unity of theory with practice, of design with reception, and of experience with intellect, all dialogues that we strive for in the best of our work. That such experiences might also haunt our imaginations is perhaps the highest calling of art, and in gardens, as Hunt has so eloquently taught us, we might find the greatest perfections. 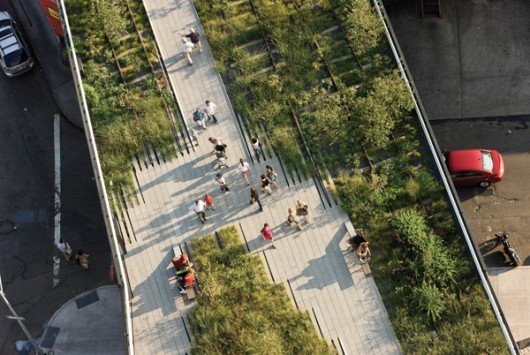