The opening of the Landscape Institute/ The Building Centre exhibition Rethinking the Urban Landscape, was a great success with a large and varied crowd. Speaking at the opening, LI president Noel Farrer said: ‘This exhibition makes the case for landscape-first thinking. Many of the projects that you can see here appointed the landscape architects first.’

He praised the large and well-known projects, such as the Olympic Park, but added, ‘It is in the smaller-scale interventions that landscape genius is revealed. Landscape is communal. It really changes lives.’ He added, ‘The measure of success of the exhibition will be if we stimulate more people to demand that landscape-first thinking is hard-wired into our approach.

Noel spoke about his recently announced appointment to the government’s Design Advisory Panel on housing. ‘I hope it will ensure that landscape is a must and not a nice to have for government and developers and everybody,” he said.

The exhibition will run in London until 10 February. Later in the year it will tour the UK.

The programme of events to run during the exhibition in London has now been announced. Lewis Blackwell, executive director of strategy and development at The Building Centre, and Paul Lincoln, deputy chief executive at the Landscape Institute, will chair the events.  They are as follows:

How did designing the Olympic Park influence landscape practice?
Thursday 22 January, 6pm
The Olympic Park changed the public perception of landscape architecture. One of the most successful legacies of the park was groundbreaking design that created a place for the Olympics but also a place for the local community. Legacy also goes further than the Park, as the influence on a whole range of landscape projects has been significant. Leading practitioners explain what they did next and the impact of the Olympics on their work. Speakers include Phil Askew (Queen Elizabeth Olympic Park), Tom Armour (Arup), Jenette Emery-Wallis (LUC), Andrew Harland (LDA Design) and Tim Heading (Atkins).
The event will be followed by Q&A and a drinks reception.

How do you pay for green infrastructure in an age of austerity?
Monday 9 February, 6pm
As the election battles over investment in the health service and grey infrastructure, there is no question that these are primary services that must be funded. However, similar importance is not attached to green infrastructure projects, despite widespread acknowledgement of the importance of the environment and the multiple benefits it provides.
This event brings together leading policymakers to discuss this increasingly important issue. Speakers include Katherine Drayson (Policy Exchange), Ed Wallis (Fabian Society), Sue Ireland (Parks Alliance), Peter Neal CMLI (Peter Neal Consulting) and Noel Farrer (Farrer Huxley Associates / Landscape Institute). Book here. 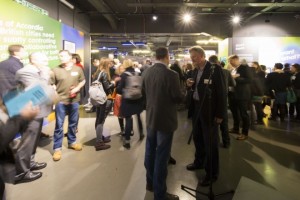