A twenty-two week project to create Nottingham’s largest intensive sky garden has been completed. It is on the fourth floor of a 26-storey apartment building. It showcases the value of investment in green infrastructure for both local authorities and the residents of urban areas.
The design, by award-winning landscape design practice Hosta Consulting, was commissioned by Nottingham City Homes’ (NCH) as part of its Decent Neighbourhoods scheme. The scheme aims to improve the lives of residents by developing green-spaces with a community focus. 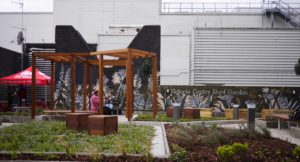 The project creates Nottingham’s largest intensive green roof. A 316 sq m community garden, designed to provide a healthy, sociable environment for 400 residents of the Victoria Centre Flats, a high-rise apartment block in the centre of the city. None of the residents previously had access to any green space.
Helen Taylor, managing director at Hosta Consulting, said:
“The brief was to create a relaxing oasis for the tenants of the Victoria Centre Flats. The result is a garden that is low maintenance and, due to its orientation, has two main areas. One is sunny with benches for the residents to enjoy the outdoors, while the other is shady with a relaxing woodland feel. Elements of the roof, including the pergola, were constructed by local apprentices.”
“This is a real community project, with many organisations getting involved. We also had a donation from tool company Fiskars which gave us tools that the residents can keep and use, and I’ve been able to give them tips on keeping the space looking great season after season. 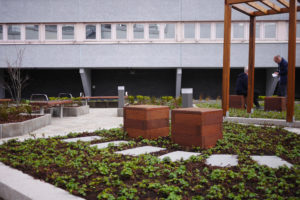