Horsham-based landscaping business, Living Landscapes, has been awarded two Silver Gilt medals at this year’s RHS Hampton Court Palace Flower Show. The firm rose to the challenge of sponsoring and building two gardens in the Summer Gardens category, City Twitchers and H U G: Healing Urban Garden, both of which have wowed the RHS judges.

Tecwyn Evans, Director of Living Landscapes, says, “It is a great honour to receive Silver Gilt medals! We are delighted to be recognised at this prestigious show, in its 25th anniversary this year. Our two gardens were very different and we are thrilled that the judges found a high level of merit in both the gardens.”

Sarah Keyser designed the City Twitchers garden to show the potential of a small urban garden to be stylish and contemporary, while enabling birds and wildlife to flourish.

The garden balances ‘soft’ rustic elements with structured, modern shapes. A spherical bird hide provides a snug setting for bird watching, while a downy camomile lawn adds a soothing fragrance. The judges complemented the overall effect of the garden.

Serenity in an urban setting

Designed by Rae Wilkinson, the H U G: Healing Urban Garden is based on the idea that green space in an urban environment can have a lasting positive impact on wellbeing.

The H U G Garden is a sensory hug provided by a small, simple green space, aimed at giving city dwellers a serene spot in which to get back to nature and restore balance. The judges said the garden was one point away from being awarded a Gold Medal.

Living Landscapes is a previous medal winner at RHS shows. Its ‘Four Corners’ garden with designer Peter Reader was awarded a Silver Gilt medal and won the People’s Choice Award at Hampton Court in 2013. In 2014, he won two further Silver Gilt medals: for the WellChild Garden, with designer Olivia Kirk, at Chelsea; and for the Al Fresco Garden, with Peter Reader, at Hampton Court. 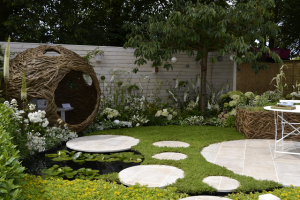