A group of parents at a London primary school have taken the issue of air pollution into their own hands, after successfully crowdfunding over £90,000, which included funding from the Mayor of London, to install a living wall in the playground of St Mary’s Catholic Primary School in Chiswick. Featuring over 12,000 plants, the living wall was officially opened by London Mayor, Sadiq Khan. He had also pledged £32,000 to the Chiswick Oasis project.
The 126m living wall, located in the school’s playground and running alongside the A4 aims to reduce air pollutants and improve air quality. This comes after surveys revealed the schools is among the 50 most polluted schools in London. The project has received support from the local community, businesses, parents and celebrities, including Jeremy Paxman, Emma Thompson and Claudia Winkleman.
Receiving funding from the London Mayor’s ‘Crowdfund London’ programme, Sadiq Khan, attended the school’s launch event to officially open the living wall. He also used it as an opportunity to raise awareness of the importance of improving urban air quality. As well as the value of community projects like Chiswick Oasis, which help to create positive change. 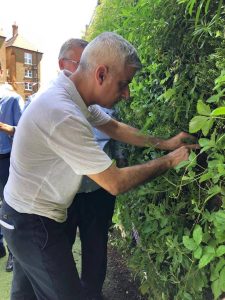 The Mayor of London, Sadiq Khan – whose Crowdfund London initiative pledged £32,000 to the project said:
“I am delighted to officially open the ‘Chiswick Oasis’ for the community who have done so much to bring this project to life.
“Our toxic air is a public health crisis that increases the risk of dementia and asthma and damages the lung development of our children. I’m doing all I can to tackle it but I can’t succeed without the support of my fellow Londoners. ‘Chiswick Oasis’ is a brilliant example of what can be achieved when communities work together to find innovative solutions to local problems and exactly the sort of project OUR Crowdfund London initiative was set up to support.”
With proven air purifying qualities and featuring thousands of plants found in the local area, the living wall was provided by world-leading living wall supplier, ANS Global, which will be maintaining the wall for free for the next five years. Set to improve air quality for pupils at the school and transforming the neglected playground area, the new green space will also be open to the public, as well as playing host to future community events, including markets and fairs.
ANS Global has also provided training to teachers and parents at the school. Teaching them about how the living wall works, as well as how to maintain the feature so it continues to thrive.
To donate or to find out more about the Chiswick Oasis project visit: https://www.chiswickoasis.com
To find out more about ANS Global visit: https://www.ansgroupglobal.com
Show More
Share
Facebook Twitter Google+ LinkedIn StumbleUpon Tumblr Pinterest Reddit WhatsApp Telegram Share via Email Print