Margaret and David MacLennan were recently awarded the prestigious Brickell Award 2022 for their Galanthus (snowdrop) National Plant Collection®. We speak to them about their award-winning collection.

The Brickell Award recognises excellence in cultivated plant conservation and has been awarded to a different National Plant Collection Holder every year since 2003. Named after Plant Heritage’s founding member and current vice-president Chris Brickell, it also celebrates the extensive and ongoing commitment, passion and research of National Plant Collection Holders.

This year’s winners are Margaret and David MacLennan. They say:  “We are very glad to have been given the award. It is a welcome recognition by Plant Heritage of our efforts over the last fifteen years to build up what has become possibly the largest publicly accessible collection of snowdrops in the UK.” 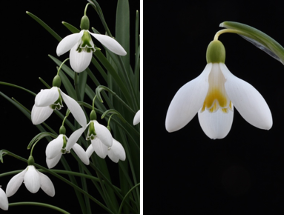 Margaret and David’s collection started simply because Margaret loved snowdrops. They moved it from Essex to Cumbria to be closer to where they both grew up (Margaret grew up in Carlisle and David grew up in Scotland). In addition to this, their seven-acre estate was getting too big for them as David observes “we’re not spring chickens”. But the move to a smaller garden has been accomplished without compromising on the scope of the collection which covers the whole range of snowdrops from heritage varieties to the rarer species as well as the latest “must have” introductions.

In their retirement they have continued to look after and grow their collection, having no favourite as they are “a bit like one’s children: one has to love them all”. It is with their passion, love, and dedication that they were able to grow such a fantastic collection.

While Margaret has been the driving force in assembling the collection, David has found a role providing moral and material support. When asked what the long term plans for the collection are, they simply say “too soon to say”. They both feel it has been a rewarding journey and one which they are happy to continue for as long as they are able, boosted by receiving the recognition conferred by the Brickell award.